Theatre Review: ‘The Cradle Will Rock’ at Iron Crow Theatre 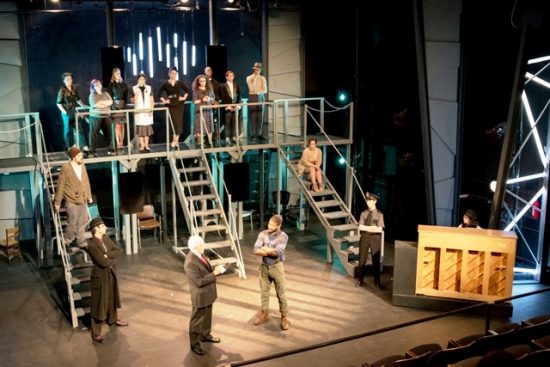 Cast of ‘The Cradle Will Rock’ at iron Crow Theatre. Photo: Rob Clatterbuck

Sometimes history has a way of repeating itself.  Imagine a musical from 80 years ago having relevancy in the present.  That is the focus of Iron Crow Theatre’s presentation of “The Cradle Will Rock,” kicking off the 2017-2018 season themed “Season of Identity” at the Baltimore Theatre Project.

“The Cradle Will Rock,” is a pioneering work with book, music and lyrics by Marc Blitzstein. Brechtian in style, the musical takes a swipe at wealth, corruption, capitalism and the political power they bring while poor people struggle to get by.

A sizable, spirited ensemble and an imaginative and functional set designed by Chris Miller are effective under Mr. Elias’ guiding hand in bridging the issues confronting the nation decades ago with the current state of affairs.

“The Cradle Will Rock” perhaps will be remembered mostly as the first show ever to be shut down by the federal government.  In 1937, the federal agency Works Progress Administration (WPA) oversaw the Federal Theatre production, which had been in rehearsal for weeks.

The WPA hurriedly canceled the production at the Maxine Elliott Theatre under the guise of budget cuts and sent armed guards to keep any costumes or sets from being removed from the theatre. Many believed that the musical had been censored because the pro-union plot was “too radical.”  Moreover, Actors’ Equity barred cast members from performing the show onstage.

Undaunted, Mr. Blitzstein, Producer John Houseman, and Director Orson Welles found the Venice Theatre and a battered upright piano.  They along with the cast and hundreds of onlookers marched 21 blocks uptown to the theater garnering a bonanza in publicity. As Mr. Blitzstein launched into the introduction, Olive Stanton, who played the character Moll, stood up in her seat and sang the opening number from the audience. The rest of the cast followed suit.

While it is doubtful the federal government would try to stop Iron Crow from presenting this musical, Mr. Elias strives to connect this piece with the corruption and bullying tactics of our president and his administration and the income inequality that exists in our society.

“The Cradle Will Rock” is a direct response to and protest against the current administration, the evils of unregulated capitalism and the dangers of an imperial presidency,” says Mr. Elias in a statement.

Indeed, there are similarities, and the use of ephemeral projected images of President Trump, Department of Education Secretary Betsy DeVos and others on four small screens at the rear of the stage visually fosters that connection.

The ten-scene, single act musical is narrated both musically and verbally (announcing scenes) by the sole musician, the pianist Mandee Ferrier Roberts, who expertly performs virtually throughout the show. The piano, which includes a repository for props next to it, is moved about the stage for the various scenes and the back of it is used at times as a bar or a judge’s desk in the courtroom.

Though the score is not all that melodious, the lyrics are the vessel for the story as little dialogue transpires.  A few numbers stand out but mostly for their comedic qualities.  Others are moving and well performed. However, at times, the piano drowns out some vocals and dialogue, which could be remedied if the principals are mic’d.  The problem is not noticeable in group numbers,

“The Cradle Will Rock” is set in the fictional town Steeltown, USA during 1937 while the Depression was still in high gear.  The story centers on Larry Foreman (played powerfully by Terrance Fleming whose rendition of the title song is superb) and his attempts against the odds to unionize Steeltown’s workers.

He must contend with the town bully, greedy, authoritative, anti-union Mr. Mister (not to be confused with the 80’s pop rock band of “Broken Wings” fame) who controls institutions including the factory, the newspaper, the clergy, the arts, the university, even a physician.  His role is portrayed smoothly by theatre veteran Greg Grenier, though I would like to see him, as the antagonist in the story, come off a little meaner.

Most of the characters in this ensemble production are either victims of Mr. Mister, such as Harry Druggist (played emotively by Jonathan Jacobs) who have sold out to Mr. Mister one way or the other, or members of the Mister family including Mrs. Mister (I love that name) played by Allison Bradbury and their son Junior Mister (effectively played by Mark Quackenbush). He’s an incompetent Eric Trump-like figure who, as a result of the reluctant compliance of the newspaper’s editor to Mr. Mister’s demand, is deposed to Honolulu as a correspondent.

Editor Daily, the aforementioned editor, is also coerced by Mr. Mister into writing damaging pieces against the union and Larry Foreman.  Justin Johnson does a splendid job showcasing his strong acting skills and vocals in that role particularly in the song “The Freedom of the Press.”

Patrick Gorirossi as the musician Yasha and Eduard Van Osterom as the painter Dauber, click well in the campy numbers “Don’t Let Me Keep You,” “Ask Us Again” (with Ms. Bradberry) and “Art For Art’s Sake.”  These songs, which take place in one scene in a hotel lobby, provide the most laughs in the production. There should be a video made of this duo performing in “Don’t Let Me Keep You.”

Matt Winer passionately and energetically plays Stevie, the son of Harry Druggist, who gets killed in a car bombing intended to murder Gus Polock, the newly elected member of the union (Mark Quackenbush) and his wife, Sadie (Monica Albizo who also plays the role of Sister Mister).

Caitlin Weaver is wonderful as Moll, a prostitute arrested for not succumbing to the demands of a corrupt detective, Dick (competently played by Matthew Lindsey Payne), and who hears the story of Mr. Mister’s antics from Harry Druggist.  Her voice is in fine form in “Moll’s Song” and “Nickel Under the Foot.”

Ian Andrews as Virgil, a clumsy-ish policeman, is comical with his Keystone Kops movements.

Felicia Akunwafor as Ella Hammer, the sister of a killed steelworker, performs the show-stopper number “Joe Worker.” In this emotional song she futilely pleads with Dr. Specialist (Roxanne Daneman) not to state that her brother was drunk causing his accident as pushed by Mr. Mister but in fact he was murdered.

Rounding out the cast are Barbara Madison Hauck as President Prexy, Chelsea Paradiso as Professor Mamie, and Meghan Taylor as Professor Trixie.

Chris Miller’s set has been touted as Iron Crow largest ever.  It has an industrial feel to it given the locale is Steeltown.  It includes a scaffold with three sets of stairs leading from the stage and sets of industrial looking lights on the sides and rear.

As mentioned earlier, four small projection screens are mounted on the back, and a few chairs are also in the rear where performers not featured in a particular scene are situated.  The omnipresent piano shifts positions depending on the scene.

Janine Vreatt’s lighting design is outstanding and works cohesively with the set and the music.  And Matthew Smith’s costumes accurately portray the attire from the period.

At a time when a large segment of our country is railing against the disproportional power the top one percent of income earners accrue at the expense of the working class and when a significant part of the country currently sees our president to be dictatorial and unfit for office, the historic “The Cradle Will Rock” provides frightening similarities.

A talented and enthusiastic ensemble under the solid direction of Sean Elias gives Iron Crow Theatre a welcome boost as it launches its new season.

Advisory: “The Cradle Will Rock” contains mature themes, adult language, sexual content and violence and is not suitable for patrons under age 18.