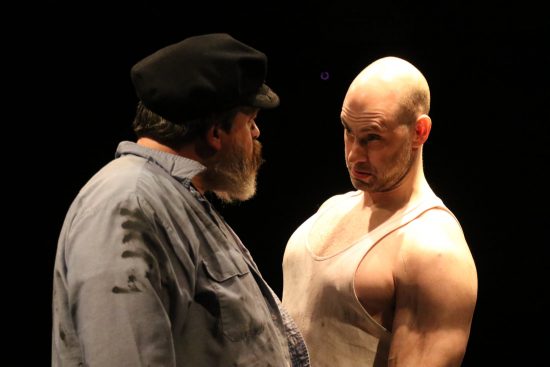 Eugene O’Neill is a widely revered playwright, most known for his masterpiece, “Long Day’s Journey Into Night.”  But there is another, more expressionist arrow in his theatrical quiver – the excellently realized and beautifully acted piece on display at Spotlighters Theatre, “The Hairy Ape.”

One of the best of O’Neill’s expressionist plays, “The Hairy Ape” is the story of Yank, a young man who thinks with his fists and is obsessed with a notion of belonging.  His threateningly bellicose demeanor is introduced in the first scene, set in the boiler room of a passenger ship, where he and his fellow workers toil in deplorable conditions that suit Yank just fine.  When the daughter of the world’s largest steel producer (who just happens to own the ship) ventures into the boiler room, out of a misguided idea that she could somehow ‘help the little people if she could get to know them’, Yank is terrified that he has seen a ghostly vision and for once is speechless.  When she faints at his fierceness, he becomes fixated on the fact that she and every one of her ilk have somehow ‘put something over on him.’  How this fixation leads to his total development is the crux of the rest of the play.

The Spotlighters Theatre’s production of ‘The Hairy Ape’ is nothing less than great theatre.

Director Sherrionne Brown should be put on some kind of national theatrical treasure list. One of the most thoughtful and thought-provoking directors around, she takes exquisite care with each element of every show she touches. Nowhere has that been more evident than in this production.  Brown has assembled a crack team who all bring their A+ game with outstanding results.  She has paced the show with just enough ebb and flow during and between scenes that the two-hour show never lags, yet there is time to savor every moment.  There are quirky and unexpected elements that spring directly from her vision, such as the percussive accompaniment by the actors pounding and tapping their hands and various props on the floor and the set to create rhythms to suggest the workings of a ship’s boiler room, or the beating – and stopping – of a human heart.  Sherrionne Brown’s direction is absolutely brilliant.

The impressive and appropriately minimalist set conceived by Ms. Brown is sumptuously lit by the lighting design of Al Ramer.  The man is a lighting wizard, using lights to heighten the emotional elements of a scene with a panache that is rare and so much better than the usual ‘lights up-lights down’ schematic that colors so many local productions.  Ramer and Brown, with an assist from Alan Zemla,  have perfectly exemplified one of the main elements of expressionist theatre – sets and lights that suggest the starkness of the human experience.  The costume, makeup and choreographic teams share credits, and each does a terrific job in those areas.

The entire cast throws themselves into their characters with a wild abandon when needed, icy control when called for and always with a level of professionalism that is always compelling.  Several of them handle dialects ranging from Cockney to Irish with accuracy. Even their facial expressions are always in character, a true measure of accomplished actors.  Of particular note in the ensemble are Karen Starliper’s languid air of boredom as Mildred, and Julie Press’ stridently arch Aunt.

Phil Gallagher as Long is a wonderful counterpoint to Yank’s abrasive character.  Gallagher has a calm delivery with a perfect Irish accent, with great timing and provides a welcome respite in the storm of Yank’s tirades.  And Thom Eric Sinn as Paddy is perfection as the drunken boiler room worker who bemoans the loss of the days of yore on the high seas, when ‘ships were clippers and the sea was a part of the ship and the ship was us.’  His monologue early on in the first act stuck with me for the rest of the show because it was so well done that I could almost smell the brine.  A beautifully nuanced performance.

Michael Leicht as Yank elicits so many emotions in one performance that he is exhausting to watch. But in the best possible way.  I was decidedly uncomfortable through much of his opening scenes. The testosterone level is so high, fueled by Yank’s belligerent, bullying attitude towards everyone around him that it bordered on terrifying.  Leicht is as sharp and focused as they come, displaying the only emotion his character will allow the world to see, with so much skill and dedication that it is truly stunning in its impact.  In Act 2, when he is confronted with a world that he cannot find his place in, adrift in a world he cannot understand, he is vividly broken.  As his devolvement progresses to the final scenes where he is coiled in a fetal position on the ground, he is mesmerizing.  This is a tour-de-force performance by a first-rate actor in a must-see production.

“The Hairy Ape” explores themes of alienation, deprivation, socialism and class.  Brown has brought to life one of O’Neill’s most iconic plays and Baltimore area audiences will be talking about this one for years to come.  Good theatre makes you think.  Great theatre makes you feel.  The Spotlighters Theatre’s production of “The Hairy Ape” is nothing less than great theatre.

Advisory:  Adult Language and Situations – Parental Guidance Necessary. No one under age 13 will be admitted without an accompanying adult.