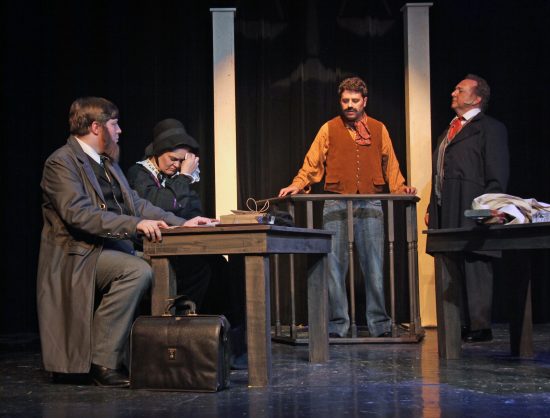 Rich Amada’s historical drama “The Judicial Murder of Mrs. Surratt” is making its world premiere at Aldersgate Church Community Theater in Alexandria this month, in a production where Charlene Sloan, in the title role, is the standout.

Amada’s 2005 play won the Sprenger Lang Foundation’s Nathan Miller History Play Contest in 2007 and has been workshopped and produced in part several times since, but has never had a full mounting until now. The simply-staged drama is a good fit for the Aldersgate space, and focuses on the aftermath of the Lincoln assassination, a topic that is currently in vogue in D.C.-area theatres.

… the ACCT production offers a solid look at this historical moment, punctuated by several laudable performances.

Mary Surratt is one of the great mysteries of the assassination. She owned a Washington boardinghouse where assassin John Wilkes Booth and several co-conspirators were often seen, but historians disagree on whether she was a hapless victim, unaware of their activities, or if she intentionally lent them a safe haven to plot.

Amada tips his hand about his own view with the play’s title (borrowed from an 1895 book defending the subject), though in a 2011 interview with a California public radio station, he said he was unsure: “I would have to assume that if these people are coming and going she had to know something was up. I believe Mrs. Surratt knew more than she said she did. Whether or not she was actually in on the conspiracies, I don’t know.”

Those doubts are not evident in the uneven script, which is entirely in Mrs. Surratt’s corner. Amada opens with a rush of names of now-obscure conspirators, assuming that the audience will know who they are, and later in the play lurches the other way, having characters launch into long explications rather than letting the audience draw conclusions.

The strongest components of director Eleanore Tapscott’s cast surmount these textual issues. Sloan brings sympathy and fire to Mrs. Surratt, a proud woman who is rendered helpless as control of her life is stripped away. (Unfortunately, the mechanics of the narrative force Sloan to be almost entirely silent during the play’s courtroom scenes, and her voice is missed.)

Emily Golden also impresses as Surratt’s daughter Anna. Golden runs a wide range of emotions, delivering trauma and panic, but also drawing laughs in one of the show’s few comedic scenes, when Anna goes moony-eyed over the dreamy Booth, who is oblivious to her interest.

Nicholas Barta plays both Booth and boardinghouse resident Louis Weichman, now a witness for the prosecution. He is effective in both roles, but what stands out the most is the ease of his transition, in one scene morphing from the reserved Weichman to the intemperate Booth during a brief stage-crossing.

Amada knows his subject, and there is much to be gleaned from his play. A further revision could turn “Judicial Murder” into an outstanding drama. For now, the ACCT production offers a solid look at this historical moment, punctuated by several laudable performances.