Theatre Review: ‘To Kill a Mockingbird’ at Laurel Mill Playhouse 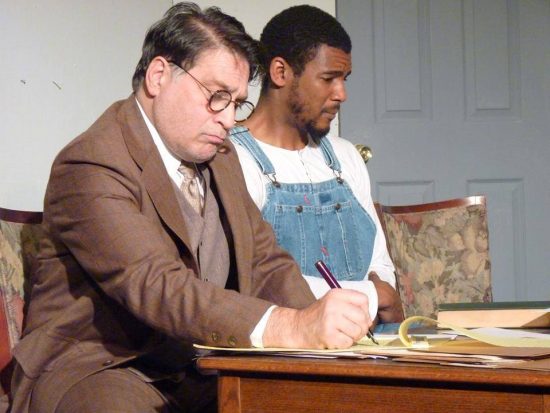 “To Kill a Mockingbird” is one of America’s great pieces of literature. Its hero, Atticus Finch, is revered by many. Harper Lee’s novel about life in Maycomb, Alabama in 1935 still resonates with readers today. The play, dramatized by Christopher Sergel, is able to engage audiences in the story in a different way.

The play, now showing at the Laurel Mill Playhouse, is told from Scout’s perspective a young girl in Maycomb who doesn’t think her father is as interesting as the other fathers. She and her brother Jem’s mother passed away when she was two and they were raised by their father Atticus and their cook Calpurnia. Atticus is a lawyer and has taken on a case that will define his career and change the course of the town. Scout is taught the powerful lesson that you can never know a person until you try to see things from their perspective.

It is amazing how this story still resonates with audiences in such a powerful way.

Adult Scout, or Jean Louise as she eventually goes by her given name, was played by Maureen Rogers. She narrated the story well and shared the space easily with the action on stage.

Scout was played by Molly Ross, a clever and thoughtful girl who played well off of Zach Polignone, who played her brother Jem and Gareth Swing who played their friend Dill. All three children have good stage presence and clearly were having a wonderful time.

Atticus was played by Joe Mariano, a strong actor who has a deep and commanding voice. His work in the courtroom scene, in particular, was compelling. Donise Stevens played the role of Calpurnia with a heavy fist but deep gentleness towards the Finchs.

Tom Robinson, the black man convicted of attacking a white woman, was played by Sebastian Leighton. Leighton’s resounding baritone came out trembling while he was behind bars, a truly stirring moment. The way he delivered his defense in the courtroom was passionate and rousing.

Marvin Rogers and Jen Sizer designed the set which consisted of multiple doors to represent the many front porches referenced in the story. Jem and Scout spend a lot of time on the porch as well. These porches converted easily into the county jail and courtroom.

It is amazing how this story still resonates with audiences in such a powerful way. Whether one loves the story or has never heard it before, it still can teach us all a lesson in conflict resolution and the value of treating each other with respect, no matter what the cost.

‘To Kill a Mockingbird’ runs at Laurel Mill Playhouse through November 12. For tickets and more information click here