Theatre Review: ‘Vanya and Sonia and Masha and Spike’ at Highwood Theatre 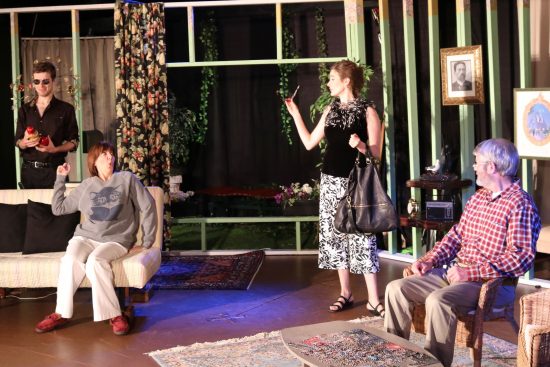 Thomas Shuman, Margaret Condon, Rachel Varley, and Richard Fiske in “Vanya and Sonia and Masha and Spike” at the Highwood Theatre. Photo by Toly Yarup.

Three women (though not Three Sisters) elevate director Melissa B. Robinson’s production of Christopher Durang’s “Vanya and Sonia and Masha and Spike,” running through the end of October at the Highwood Theatre.

There’s been a fruitful orchard of irreverent modern takes on the works of Anton Chekhov in the D.C. area over the past few years, most notably Aaron Posner’s “Stupid F**king Bird” and recently closed “No Sisters,” and Ari Roth’s “The Seagull on 16th Street.” But while Durang’s 2013 Tony winner has many nods to the Russian playwright, it is primarily rooted in Durang’s trademark absurdism.

The joy is in Durang’s language, making “Vanya” something of an actors’ playground.

Siblings Vanya and Sonia, named for Chekhov characters by their artistically inclined parents, live quietly and joblessly in a cozy Pennsylvania house paid for by sister Masha, a successful (if not critically acclaimed) film star. The action takes place over two days, with Masha sweeping into town with current lover Spike in tow. They bicker, they pine, their housekeeper Cassandra offers portentous predictions, and Spike collects a wide-eyed young aspiring actor named Nina. There are also Snow White costumes.

That’s the show, straightforward and simple. The joy is in Durang’s language, making “Vanya” something of an actors’ playground. Three members of Robinson’s solid cast stand out in particular.

Margaret Condon shines as Sonia, cloistered by the vicissitudes of life and her own timorousness. Her world is small and getting dull, but it is safe and comfortable, and she’s always had brother Vanya to cling to. Condon adds dimension to the mousy Sonia with a wonderful array of subtle facial expressions — watch her reactions during the reading of Vanya’s play.

Amber James impresses as Nina, the small-town ingenue Spike had hoped to impress. James plays Nina as a bit dazed by the whirlwind in which she finds herself, and a bit in awe of the creative types she’s stumbled across, but never as dim-witted or childish.

Rachel Varley stomps the boards delightfully as the cartoonishly narcissistic Masha. Her re-enactment of an acting-lesson exercise is a riot, but she’s just as fun to watch when others have the floor. As she is forced to listen to these siblings she’d happily left behind, she sucks in her cheeks and raises her brows to become a human eyeroll.

Robinson’s choice in casting Varley was chancy. Durang’s script calls for the three siblings to all be in their fifties; a line about being “only 41, possibly 42” is intended as a joke where Masha is lying about her age. Varley is considerably younger. This only matters because what depth the character has lies in her insecurities about aging in Hollywood; Masha is meant to be significantly older than her boy toy Spike. But Varley and actor Thomas Shuman look like they might have gone to school together. Still, Varley is so strong as Masha that the risky casting succeeds.

Richard Fiske is quiet but convincing as Vanya, the calm within this storm; he nails Vanya’s unexpected outburst of rage in a long monologue near the end of the show. Kecia Campbell does what she can with the underdeveloped role of Cassandra, though she rushes through some of the character’s monologues in an attempt to show urgency. This leads to a few of the jokes and references getting lost.

In addition to its professional company, Highwood is primarily a teaching theatre for grades four through 12. The effective set, lighting, and sound design were all the work of a crew and artistic team from grades five through nine, and their work matches the quality of any area theatre of comparable size. This is just one of the many laudable aspects of this current production.

[Full disclosure: I have worked with the Highwood Theatre as a performer, but not with this particular director or artistic team. My son has also worked with the student company.]

“Vanya and Sonia and Masha and Spike” runs through October 29, 2017, at the Highwood Theatre, 914 Silver Spring Avenue, Silver Spring. Click here for tickets.