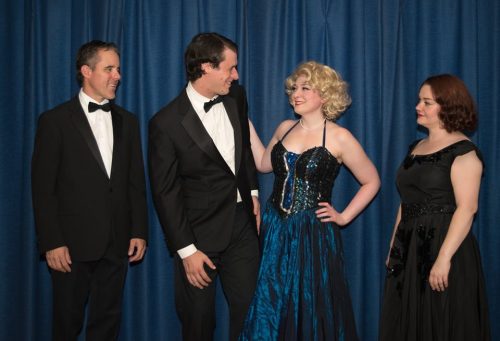 As Maryland trudges its way through an uncomfortably warm October, “White Christmas” at Rockville Musical Theatre was a well-needed reminder that Christmastime is just around the corner. Adapted from the beloved holiday classic of the same name, “White Christmas” features a jazzy score by Irving Berlin and a silly, lighthearted script by David Ives and Paul Blake.

From the moment I walked into the F. Scott Fitzgerald Theatre, I was surrounded by Christmas cheer, from the sight of snowflake-shaped lights being projected onto the red curtain to the sounds of the pit playing simple interpretations of classic Christmas carols. Despite this, the plot of “White Christmas” really only uses the holiday season as a backdrop for the story, which follows two successful entertainers and army veterans, the down-to-earth Bob Wallace and the outgoing Phil Davis (Paul Loebach and Michael Page) as they follow a pair of beautiful and talented sisters, Betty and Judy Haynes (Amanda Jones and Sirena Dib), to the Columbia Inn in Vermont. When they get there, they are surprised to find the inn, which is losing guests due to the lack of snow, is owned by their former general, Henry Waverly (Jack Mayo). Hilarity, conflict and upbeat tap numbers ensue as Bob and Phil plot to put on a performance at the inn to draw in business, all the while trying to court the Haynes girls.

The cast is rounded out by Liz Weber as snarky concierge Martha Watson, Meredith Abramson as General Waverly’s precocious granddaughter, Bruce Rosenberg as television producer Ralph Sheldrake, Hillary Templeton and Jackie Rogers as ditzy duo Rita and Rhoda, Matthew Ratz as stagehand Ezekiel Foster, and Steve Kaufman as neurotic stage manager Mike. There was also a thirteen-person ensemble that thrived under the direction of Duane Monahan and music director Marci Shegogue. The ensemble-heavy numbers like “Happy Holidays / Let Yourself Go” and “Blue Skies” were some of the most entertaining in the show thanks to the cast’s dazzling dancing and pitch-perfect harmonies. Their energy and excitement was even enough to cover up such egregiously silly lyrics as “I want to wash my hands, my face and hair with snow.”

It revels in its old-fashioned charm, its toe-tapping tunes, and its amusing campiness.

Equally engaging were Amanda Jones and Sirena Dib as the Haynes sisters. Jones played the melancholic but kind-hearted Betty with the utmost sincerity. Her sweet, lilting voice enchanted the audience in the playful “Love and the Weather” and pulled at heartstrings in the torch song “Love, You Didn’t Do Right By Me.” Meanwhile, Sirena Dib’s Judy was charming without being overly cutesy. Her voice was equally lovely, as featured in such songs as “I Love a Piano.” Their iconic duet, “Sisters,” was one of the highlights of the show; Jones’s and Dib’s voices blended seamlessly together, and the choreography by Monahan and costumes by Richard “Bat” Battestelli perfectly emulated the look and feel of the source material.

Another notable performance was that of Liz Weber as Martha Watson, the concierge at the Columbia Inn. Weber embodies the snarky, spotlight-seeking character with unending energy, a stunningly powerful voice, and impeccable comedic delivery. Despite the fact that show’s plot is somewhat outdated, and many of its jokes are lost on a modern audience, every single one of Weber’s one-liners landed seamlessly. Weber’s trio with the Haynes sisters, “Falling Out of Love Can Be Fun” was a showstopper and my personal favorite number, with harmonies so precise and together that I could hardly believe I was listening to a live performance!

The show’s sets by Maggie Modig were sparse but incredibly charming. Set pieces such as a front porch decorated with dozens of poinsettias were both visually appealing and pleasantly modest. The costumes by Battestelli had a similar effect; they superbly invoked the time period and the mood of the show, while simultaneously looking stunning on the stage. Overall, the technical production was wonderful and did a great job of immersing the audience further into the world of the show.

“White Christmas” is not the most extravagant show in the world, nor is it the most complex, artistic, or deep. But we shouldn’t write it off just because it doesn’t include a lot of what we look for in modern musicals. It revels in its old-fashioned charm, its toe-tapping tunes, and its amusing campiness. If that doesn’t sound like the type of musical you’re inclined to enjoy, then maybe “White Christmas” isn’t the show for you. But if you’re willing to ignore the corny love story and the dated jokes, you’re bound to find some Christmas cheer in all this show and its dynamic cast have to offer.

Running Time: 2 and 30 minutes, with one intermission.