Theatre Review: ‘Wilderness’ at The John F. Kennedy Center for the Performing Arts 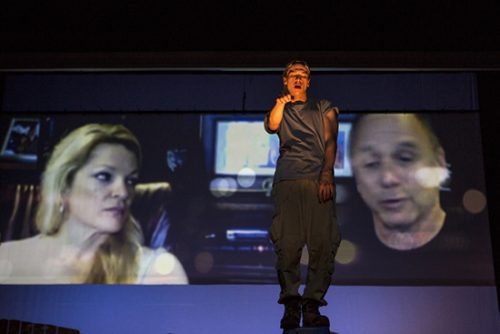 The play, co-written by En Garde Arts Artistic Director Anne Hamburger and director Seth Bockley, is a tour de force. It deals with the true stories of six teenagers who deal with various mental illnesses and the parents that are at a loss to help them. They are sent by their parents to a wilderness therapy camp where they have to learn to cope with their self-destructive tendencies through learning basic survival skills.

If plays were beverages, “Wilderness” would be a cool drink after a long hot hike, it feels so immediately necessary and revitalizing.

The production is described as a multimedia documentary theatre piece. The parents of the children who the characters are based off show up in video interviews discussing their child’s mental states and what prompted them to turn to this unusual form of therapy. The videos combine with movement to create a performance that is malleable, highlighting the inherent connection between people who are striving towards a common goal – to be the best self they can be.

It is immersive and mercurial, with incredible technical aspects and beautiful folk music. Even the characters change, switching between the roles of camp counselors and camp patients. Wonderful performances abound.

Scott Freeman plays wise guy Cole, a teenager who deals with depression through marijuana and reckless behavior. His monologue about an experience being on top of a crane under the influence is incredibly moving.  Chloe, a young woman who engages in self-harm to distract herself from the pain inside her head, is played by New York based actress- Holly DeMorro. She excels in her monologue where she describes how rumors about her in school made her change her behaviors in an unhealthy way.

Caitlin Goldie plays Elizabeth, a young woman who deals with her anger management issues through recreational drugs. Taylor Noble plays Sophia who deals with severe anxiety that deals with early trauma. A scene that is especially poignant is the scene where one of the girls coaxes the other out of a panic attack.

Michael, a young man dealing with issues of anger and violence, is played by Jake Williams, who alternatively plays a friendly counselor.  Luke Zimmerman also stars as Dylan, a young man struggling with his identity. His parents are the only ones who do not appear on screen for the protection of their child, citing the pervasive trend of violence towards transgendered children and teenagers.

Scott Bolman, internationally renowned lighting designer, creates the beautiful light of the Utah wilderness, together with Carolyn Mraz, who utilizes moveable cycloramas to change the setting of the play from the reality of the unforgiving outside to the terror of the character’s interiors.

“Mental Health, like making art is a life’s work,” says writer Anne Hamburger and this play makes that feel like something that should be celebrated rather than agonized over. If plays were beverages, “Wilderness” would be a cool drink after a long hot hike, it feels so immediately necessary and revitalizing. It makes you wish there were more pieces like this.

Wilderness is running through October 15th, 2017 at the John F. Kennedy Center for the Performing Arts, for tickets or more information, click here.