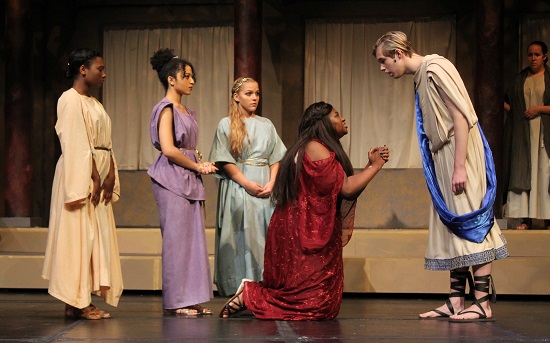 Betrayal of a husband to a wife, the unbearable agony of a broken heart, child-sized bloody hand prints, and a few not so innocent bystanders. The ancient Greek tragedy of “Medea,” produced in 431 BC, is a horrifying classic of gore, death and hatred; but when Bullis Players presents their own production of the Corinthian based story, they take it to a whole new level of memorable.

With a simple yet satisfying set to encompass the astonishing talent of the actors and actresses onstage, it was challenging not to get pulled into the intense monologues and conflicts occuring before our eyes. The cast took advantage of all space that the stage allowed and effectively and effortlessly moved from one interaction to the next with their precisely staged movements and actions.

The stage of Bullis School showcased an amazing amount of talent with three individuals in particular. The first being the leading murderess herself, Medea, played by Tamia Haskins. Ms. Haskins gave a bone chilling performance as she portrayed her character as broken and mysteriously detached while she spoke softly and stared in one direction with no destination at one moment, and lunged in blind rage with crisp, clear, and jump worthy vocals at another. Her demeanor was a fickle light switch that gave no clear inclination of when she would go off, and every time she slowly stepped onstage, every set of eyes were glued to her in anticipation of what was to come.

The next actress who took control of the stage with every appearance of her character was the Nurse, portrayed by Sydney Smith. With every second that she was under the intricate lights of the auditorium’s focal point, she committed 110% to her character and her performance was more than simply admirable. Even when she wasn’t delivering eye opening monologues or interacting effortlessly with the other actors on stage, she did not cease to act and her reactions were spot on in reference to what was happening on stage. Because Smith was distinctively the most experienced of the cast, the show began and ended substantially because she was the first and last person the audience heard from.

The final character that radiated confidence in her acting choices was the 1st Woman of Corinth, played by Siena McKnight. Similar to Smith, McKnight also gave a stellar performance that did not halt when she was not speaking or being spoken to, and whenever she did speak, she demanded the attention of every seat in the auditorium to be on her velvety voice. With McKnight’s magnificent inflections and stern belief in what she was saying, she made it evident that she was the voice of reason among her chorus colleagues and this shone through her character due to her excellent acting techniques.

Throughout the show, the audience was kept on the edge of their seats and recoiled at the impressively well thought out gruesome end. Although some of their brilliant ideas may have been overbearing at times, Bullis School’s production of “Medea” leaves a mark deeper than a stab wound in the memories of everyone who was fortunate enough to have experienced it.