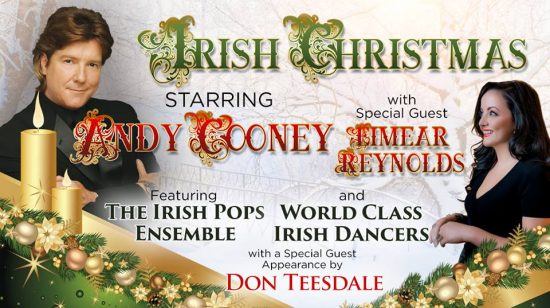 **Due to weather conditions,  Irish Christmas 2017 Bel Air is postponed until Wednesday 12/13 at the same times.

The Spirit of Ireland and Christmas comes alive as Andy Cooney once again gathers together the finest musicians, dancers and performers as they celebrate the most joyful time of the year. All are welcome!

The Cooney charisma and charm have made Andy a favorite among American and Irish audiences. Andy is surely one of the greatest singing sensations on the stage today. Being christened Irish America’s Favorite Son by The New York Times is a well deserved honor. He has filled Carnegie Hall seven times and also performs with the well loved trio, The New York Tenors.   (andycooney.com)

“With a blend of favorite Irish ballads and instant classics, Andy Cooney once again proves why Irish Music is dear to us all. …With his special touch, Andy proves why he is a favorite among all that have a place in their heart for Irish Music.  – Irish-Corner.com.

Eimear Reynolds is from the beautiful picturesque village of Rooskey in Co. Roscommon and was brought up in an extended family of musicians and singers so it was no surprise when she began to have a keen interest herself.  Having trained classically for more than twelve years and completing a bachelor of music degree in the Dublin Institute of Technology Conservatory of Music and Drama, Eimear is now crossing over and exploring more contempory genres.     (eimearreynolds.com)

“I want to empathise with the world around me through music. I want people to listen to my music and connect with my storytelling”. – Eimear Reynolds.

This is the first year of what Harford County Singer/Songwriter, Don Teesdale, now also concert promoter, hopes will become a yearly tradition for families and friends in the local area.   Teesdale, a 30 year military veteran, is an Army Aviator, currently serving in the U.S. Army Reserves, and is a retired public servant.  He launched his music career after serving two combat tours, during which time, visiting USO Entertainers personally encouraged him to pursue his dreams of a music career.  World renowned Irish Tenor,  Dr. Ronan Tynan, and country music stars Kellie Pickler and Neal McCoy, have all invited him on stage to perform.  He now performs regularly as a lead singer in local classic rock band: “Alton Street” and as a mobile DJ.   Meanwhile, a member of Nashville Songwriters Association International, Teesdale continues to write and refine his craft.  He also performs for ceremonies, weddings,  funerals and memorials.  He was the soloist at the 62nd Maryland Governor’s Inauguration, singing “America the Beautiful” as Governor Larry Hogan and Lieutenant Governor Boyd Rutherford took their oaths of office.

During a 2011 tour overseas, Teesdale listened online to the Harford Community College Radio (WHFC 91.1) Sunday Show, “Reflections of Ireland” and heard Andy Cooney’s performance of “Bring Me Home” (written by Andy’s guitarist, Colm Graham, and his friends, Maria Ragato and Michael Sheahan).  As both a soldier and songwriter, the song struck a chord in Teesdale, while he pondered the future of the regions where he served, amidst the withdrawal of forces.  Teesdale said: “I was professionally working and personally writing in those days with a theme in mind: ‘You have your freedom, but can you keep it ?’  This is a timeless question that applies to every country and to every citizen.”   Coincidentally, Andy Cooney’s guitarist, Colm Graham is the brother of Brendan Graham who wrote: “You Raise Me Up”, an endearing song which Teesdale has performed often in memorial tributes to fallen heroes, in military, police, fire, EMS, and to their families.  Through the referral of the radio show’s host, Ed McBride, the two singers became friends.  Teesdale will be singing in the December 9th Irish Christmas concert as well promoting the event.   (donteesdale.com)

The combination of these performers, with the fabulous World Class Irish Dancers and Irish Pops Ensemble, led by Bugsy Moran is sure to bring a high level entertainment experience for all who attend.

The John Carroll School Auditorium seats up to 550 people and has outstanding accessibility for guests of all ages and physical abilities.

You might want to have a discussion about Irish Christmas 2017 Bel Air around your family table this Thanksgiving.

Tickets are available online at $35 each, or discounted to $30 each for purchases of 7 more more tickets until they are sold out.   On Thanksgiving Day and Black Friday only,  a special Family/Group sale will take place, giving a $30 price for each sale of 4 or more tickets.    There are no additional convenience fees to purchase online at cooneyshows.simpletix.com. Concertgoers may also mail a check to Don Teesdale Music P.O. Box 83 Bel Air, MD 21014 or call 443-619-9048 for more information.