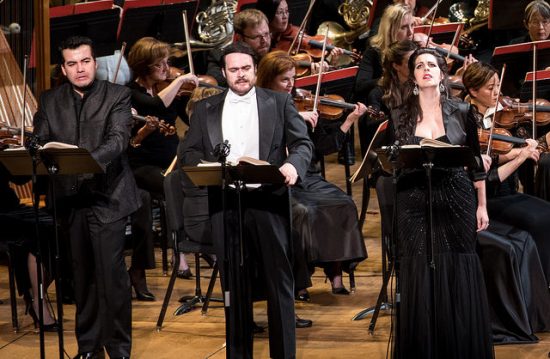 The room was buzzing with excitement Sunday night for Washington Concert Opera’s 31st season opener “La straniera” or “The Foreign Woman.” This fantastic work by Vincenzo Bellini, though much lauded during its initial premiere in the 18th century, fell out of the standard repertoire over the years and is now rarely performed. WCO’s performance marked the D.C. premiere of this masterpiece and for many in the audience, this one night only performance offered a once in a lifetime experience!

Loosely based on Charles-Victor Prévot’s novel, “L’Étrangère,” the opera’s storyline expounds on the historic account of the exile of Agnes of Merania, the second wife of King Philip II of France, and a calamitous love triangle that leads to each character’s somber fate. Arturo, despite being betrothed to the fair Isoletta, has fallen for an unknown woman sequestered in the woods who gives her name to him as Alaide. When Arturo discovers a surprising familiarity between his lover and best friend Valdeburgo, he kills Valdeburgo out of jealousy, only later discovering that the two are siblings. At the murder trial, Valdeburgo miraculously returns from the dead and saves both Alaide and Arturo from impending doom, imploring Arturo to go through with his marriage to Isoletta and urging Alaide to come with him to safety. Alaide offers her forgiveness to the desperate Arturo for his actions against her brother if he promises to forget her and marry the sweet Isoletta. Unable to marry without love, Arturo begs Alaide to run away with him. It is at this moment that the declaration is made that Queen of France has died, leaving Alaide/Agnes the true queen and requiring her to return to her husband the King of France. Distraught with grief, Arturo falls on his sword and Alaide decries heaven in an impassioned final plea and dies of despair.

From the star-studded cast of singers to the shimmering buoyancy of the orchestra, Washington Concert Opera’s production of ‘La straniera’ proved to be a rapturous night of music that appealed to the pathos in us all.

Amanda Woodbury as Alaide enveloped the hall with a soprano voice of majestic power that gave no hint of being under the weather as announced prior to the performance. Her stage presence perfectly captured juxtaposition of Alaide’s restrained desire with nobility of Queen Agnes. Her counterpart, Gerard Schneider, was equally as compelling in his dynamic portrayal of the hot-blooded Arturo. While spanning the emotional gamut, from the throes of love to utter shame and eventual suicide, Schneider’s thrilling characterization did lead to an unfortunate inconsistency of tone and pitch on several occasions although Schneider proved himself to be an incredibly talented and nuanced dramatic tenor.

Although the role itself was sparse, Corrie Stallings’ sweet but strong Isoletta captured our hearts with her stunning red gown and even more stunning, luminous mezzo soprano timbre. Isoletta’s second act aria in duet with a chromatic flute obbligato encapsulated the grief and loneliness of Arturo’s betrayal. WCO regular, baritone Javier Array, managed to steal the show as the stern, well-intentioned Valdeburgo so much so that the audience could not contain their excitement when the realized he had come back from the dead! His aria in the opening scene of Act 2 was sung with such warmth and subtlety that its conclusion left the whole auditorium clamoring for more.

Stripped of the usual finery of a staged opera, WCO’s “La straniera” refocused the ear to better appreciate the exquisite melodic lines Bellini wrote for singer and instrument alike. The WCO orchestra under the accomplished baton of Antony Walker, both conductor and artistic director, triumphed from beginning to end in an invigorated, fully palpable performance that brought to life each hidden forest grove and amorous thought. Walker’s ardent conducting style was so transfixing from moment to moment, that he almost embodied a separate character altogether.

Adding yet another layer of musical intricacy, the WCO Chorus led by David Halon displayed a professional level of balance and attention to diction through dynamically challenging passages that enabled them to aptly support the main singers without becoming overpowering. Not to be forgotten, there were also several fabulous young voices in male supporting roles including Matthew Scollin as Montolino, Jonas Hacker as Osburgo, and Timothy Bruno as Il Priore.

From the star-studded cast of singers to the shimmering buoyancy of the orchestra, Washington Concert Opera’s production of “La straniera” proved to be a rapturous night of music that appealed to the pathos in us all.

This production had only one performance on Sunday, November 19th. However, if you have a predilection for more obscure operas from the bel canto era, be sure to check out WCO’s production of Donizetti’s “Maria de Rohan” coming February 18th! Click here for more information.