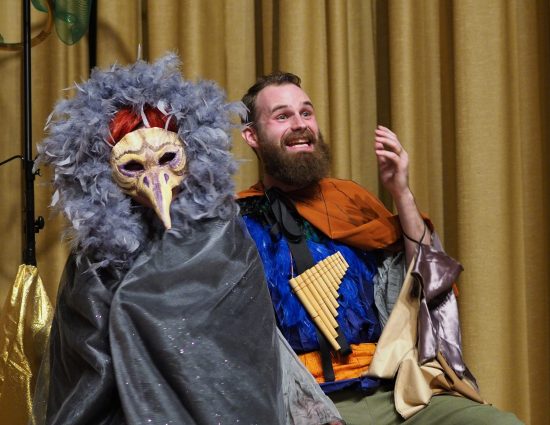 In the cozy, slightly chilly, Bavarian-esque theater of the Wesley United Methodist Church on Connecticut Avenue, Artistic Director Katerina Souvorova stood before the audience, informing that just a few more minutes would be needed to straighten out some electrical issues before the performance could begin, and, that after ten years of faithful service, the company’s visual projector was seemingly kaput. Supertitles would have to be foregone. The audience, which filled the space amply, murmured a bit but did not seem to have their spirits dampened.

…communal nature of a small company was spotlighted… joy on the faces of the performers was easily more apparent and genuine than in the larger house companies.

This scenario, rather than detract, underscored the charm and communal nature inherent in a small opera company. BCO Chairman Tom O’Grady says in his program note, “Small arts organizations are important and faithful stewards of the performing arts… Bel Cantanti Opera Company has always brought to opera a singular focus on music, and… opportunity for young singers to find a stepping stone… in an accessible and affordable venue.” While this might mean that unpredictable site quirks must be adapted to on the fly and that back-ups for costly equipment are not afforded, the evening’s performance made it apparent that it does not mean the artists involved have to treat their pursuit in a manner that is anything less than passionate and authentic.

Souvorova, from the keyboard, amongst a quartet of strings, led the overture with side-to-side sways and insistent nods and bobs of her head. The small chamber group more than adequately filled the space with the predictable, yet organic phrasings of Herr Mozart. The stage curtain opened to reveal a minimal, but sufficient set that was equal parts celestial, psychedelic, and candy forest. Within it, Tamino (Andrew Ellis), darted about, bow and arrow in hand, pursued by a serpent, the first of many puppets that would appear throughout the evening and that played a substantial role in the stylization of the production.

The three ladies (Emily Casey, Aani Bourassa, and Anamer Castrello) appeared, vanquished the serpent, spear and their own puppets in hand, and treated the audience to the first ensemble singing of the night. Their standard – strong, unified, and well-rehearsed – held true for all multiple-party numbers. Indeed, the full cast, mostly comprised of young faces, demonstrated a thorough commitment toward working well together.

Joseph Baker, as Papageno, held a narrow edge as the star of the evening. His easy, folksy baritone was pleasing and never overdone; however, it was his subtle character portrayal, an amusing mix of affable woodsman and nutty birdsman, that made his performance most enjoyable.

As Pamina, Melissa Chavez embraced the dramatic and paced her solo moments accordingly. Particularly during her aria “Ach, ich fühl’s, es ist verschwunden,” while pained by lover Tamino’s ignoring her, tone was expressively lamentful. The Queen of the Night (Lauren Randolph) provided the most interesting puppetry of the evening and did the most to enhance the visual aesthetic with adaptable proportions and a Picasso-like tint to its features. Randolph’s high range was strong and commanding. Playing Sarastro, Ethan Lee Greene provided moments of narration that were confidently delivered and well-paced in their meter. His singing proved just as measured. Peter Joshua Burroughs, as Monostatos, contributed some fine singing as well and, of all the cast, seemed most comfortable with role and stage.

The production took advantage of the light nature of the opera and featured children in a range of clever roles from animals, to minions, to bird-children. Their presence and enthusiasm served to occasionally fill the otherwise sparse stage and, like The Queen of the Night, provide a gratifying visual component.

The decision to conduct all dialog in English was a wise choice and made the story as accessible as the venue. Even when a stroke of luck during intermission brought back to life the ailing projector, the audience at this point seemed adapted to the English/German combination and glanced only sparingly at the now available supertitles.

Mozart’s big finish gets the full cast singing and lightly dancing together. Here, again, the communal nature of a small company was spotlighted and the joy on the faces of the performers was easily more apparent and genuine than in the larger house companies.

This production will be performed again on November 17 and 18 at Concord St. Andrew’s United Methodist Church in Bethesda. For tickets and information about the remainder of Bel Cantanti’s season, click here.