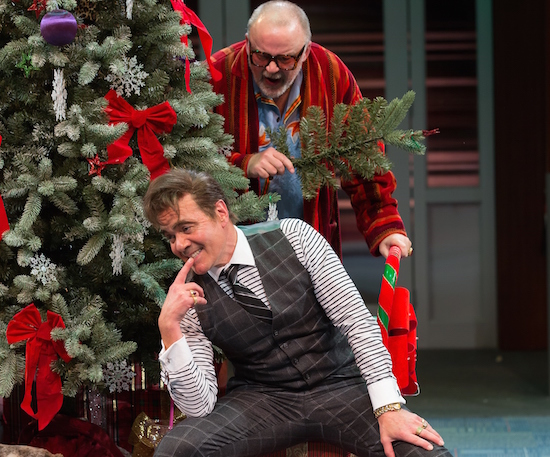 Prepare for departure! “Twelfth Night” took off this week, and once again the Shakespeare Theatre Company has taken Shakespeare’s perennial work, modernized it and breathed new life into a timeless classic.

Directed by Ethan McSweeney, “Twelfth Night” begins as a young woman named Viola (Antoinette Robinson) arrives in the kingdom of Illyria after her plane crashed. To protect herself, she disguises herself as a boy, resembling her twin brother Sebastian (Paul Deo, Jr.) and calls herself Cesario. With the help of the fool Feste (Heath Saunders), she joins the service of Duke Orsino (Bhavesh Patel) and endeavors to help him on his quest to win the love of Olivia (Hannah Yelland). Comedy ensues as mistaken identities, cruel pranks and several cases of unrequited love come together to create a play that is as hilarious as it is poignant.

The fun of the play really begins as soon as the audience walks into the theater. The stage is converted into an airport, complete with a waiting lounge and departure schedule. As the audience members shuffle in, cast members wander around on stage. Some carry baggage, some wear stewardess uniforms and others play the part of airport personnel.

This “play before the play” even carried over to my ticket, which listed a departure time instead of a start time and noted that I had TSA pre-check. All of this contributed to a clever framing of “Twelfth Night.” What was a shipwreck in the original became a plane crash, which was carried out on stage, complete with baggage falling dramatically from the ceiling.

These details really set the mood of the play and brought the audience into the world of the play right away. While I enjoyed the airport setting, the strewn luggage and airport seating was left onstage for subsequent scenes. This felt a little distracting, as the setting of an airport no longer fit once Viola had arrived in Illyria. The pieces of luggage no longer made sense.

Despite the confusing set pieces, the cast was able to shine and along with other elements of the show, turned this production into a true work of art.

Comedy ensues as mistaken identities, cruel pranks and several cases of unrequited love come together to create a play that is as hilarious as it is poignant.

The standout of the show was Saunders as the fool Feste. In a crazy, topsy-turvy world, Saunders provided a surprisingly grounded presence, especially coming from a fool. But Feste is somewhat a voice of reason for the other characters, and Saunders made Feste extremely likable. He was also responsible for much of the music of the play. With a striking voice, his musical performances were truly moving.

Though Feste is the fool, the most comedic parts of the show came from Sir Toby, played by Andrew Weems, and Sir Andrew, played by Jim Lichtscheidl. Anytime this pair were onstage they had the audience in stitches. Their scenes provided a much-needed balance to the more serious scenes between the other characters.

In the lead role, Robinson was a steady presence on stage and convincingly disguised herself as a young man. She was also able to separate her mannerisms as Viola and her mannerisms as Cesario, which made it easy to see how she could fool the other characters.

Yelland’s performance as Olivia was a perfect balance of poise and craze. She is an elegant woman with elaborate gowns and a striking parasol/veil combo. But her passion for Cesario takes on an almost mad fixation. She is both beautiful and manic, and Yelland plays both sides wonderfully.

Malvolio, played by Derek Smith, was one of the more interesting characters in the play. When he is first introduced, he is a very conservative, strict man. But in his quest for Olivia’s love, he too becomes manic and crazed. This provided for many comedic moments, but it was more of a cruel humor. His exit, chiding the other character’s for their tricks, felt over dramatic and melancholy.

The costumes, by Jennifer Moeller, were one of the highlights of the production. With the men in brightly colored floral suits, and the women in eclectic patterns and striking outfits, the costumes contributed to the feeling of the topsy-turvy world of “Twelfth Night.”

The quirky and eccentric style of the show made it a unique production that was both fun and whimsical. Despite how interesting and different the choices were, the feelings they evoked stayed true to Shakespeare’s original words and felt at home in “Twelfth Night.”