Theatre Review: ’33 Variations’ at The Colonial Players of Annapolis 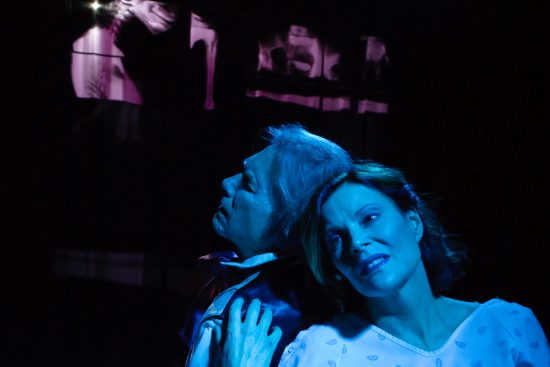 Greg Jones Ellis and Rebecca Downs in 33 Variations. Photo by The Colonial Players of Annapolis.

Similar to a musical composition rich in themes, turns, contrasts and elements of surprise, “33 Variations” at The Colonial Players of Annapolis is a masterful work that sparks a wide range of emotions and realization. Director Terry Averill and the talented cast and crew of this moving production take the thought-provoking play by Moisés Kaufman and transform into their own with powerful performances, beautiful music, and striking scenic design.

…’33 Variations’ at The Colonial Players of Annapolis is a masterful work that sparks a wide range of emotions and realization.

Seamlessly alternating between the early 19th century and the present day, “33 Variations” tells the story of respected musicologist Dr. Katherine Brant, played by Rebecca Downs, and her mission to understand what compelled one of the world’s greatest composers, Ludwig van Beethoven, played by Greg Jones Ellis, to create not one but 33 new works around one simple waltz by Anton Diabelli, played by Mark T. Allen. As she attempts to find the answers, she must not only cope with the increasingly debilitating amyotrophic lateral sclerosis (ALS), familiar to most as Lou Gehrig’s disease, but also with the troubled relationship with her daughter Clara, played by Victoria Scalfaro.

Obsession overlaps over 200 years as does drive, disappointment, physical decline, self-discovery and other parallels. As Dr. Brandt, Downs brings determination, intelligence, and grace to her character, while Jones Ellis captures the genius, eccentricity, and stubbornness of Beethoven. It’s interesting to watch the two interact to those close to them–for Dr. Brandt, it’s her daughter Clara, and for Beethoven, his loyal assistant, Anton Schindler, portrayed by Dan Alegna. The budding romance between Clara and her mother’s nurse, Mike Clark, played by Paul Valleau, and Dr. Brandt’s close friendship with Dr. Gertrude Ladenburger, played by Jean Bernard, who she meets while researching Beethoven’s sketches, adds intriguing dynamics to the production.

In the end, “33 Variations” teaches all of us that despite life’s fleeting, unpredictable moments, with perseverance and hope, harmony prevails.

Running Time: Approximately 2 hours and 40 minutes with one intermission

“33 Variations” runs until November 12, 2017 at The Colonial Players of Annapolis. For more information and tickets, visit online.