Theatre Review: ‘A Coffin in Egypt’ at Quotidian Theatre Company 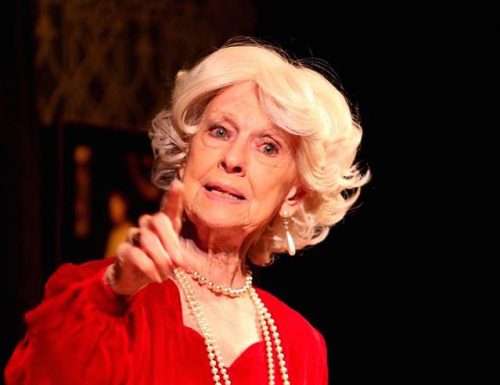 “A Coffin in Egypt,” written by Horton Foote and directed by Jack Sbarbori (who also designed the costumes, set/properties, and, with John Decker, set construction), takes us to an antebellum world that reverberates to today. Myrtle Bledsoe is a widow reminiscing about her life from 1881 until 1958. Played with devastating loss by Jane Squier Bruns, she is a woman who was trapped by convention, race and class, and she is very, very angry.

Set in Egypt, Texas, on an old plantation, she tells an unknown audience about her marriage and the injustices done to her by her husband, his family, her two daughters, and the times she lived through–Jim Crow, World War I, the Depression, World War II. She has outlived both her husband and her daughters; she seems adrift in a “big old house” that her husband built for her across the road from the original plantation house (that one of his brothers lived in) with only her maid, Jessie Lydell (subtly played by E. Lynda Bruce) as a near-silent companion.

Bruns beautifully captures her drifting through a life she never wanted…

Race, class, old money versus new money–they all play a defining role in her life. She speaks candidly about the African-American and young poor white mistresses her husband had, and the pain they caused her. A great deal of the play revolved around the eight years that she left him, and with her two young daughters, fled to Europe and Africa and New York, where her beauty was celebrated. Then the Depression hit, and she was forced to return home and to a lonely, unloved life. Her only remaining pleasures seem to be railing against her dead husband and welcoming the howling winds blowing across the prairie.

This is a difficult character to feel empathy for because the character shows little introspection or awareness of the larger forces that shaped her life; there is an element of helplessness in her vitriol. Jane Squier Bruns does an admirable job of playing an aging beauty with little to sustain her interior life except the memory of those eight years abroad. Raised to be a lady in a world where she had few assets besides her beauty and her family’s money, she never breaks free of the conventions which bound her as tightly as a golden cord might. Bruns beautifully captures her drifting through a life she never wanted and really doesn’t understand.

The lighting design by Don Slater captures the timeless bone structure of this woman and highlights her fragility. The seemingly flocked-wallpaper and the black lacquer and gilded Regency-style furniture provide a beautiful backdrop to a fading life. In the end, she is resigned to the fact that she will be in a coffin in Egypt, Texas, next to her husband and daughters and her husband’s family.

The video projections by Matthew Datcher capture discrete scenes of the African-American sharecroppers and the younger versions of Myrtle and her daughters, as well as other members of her husband’s family. They provide a poignant counterpart to her present reality.

Advisory: Use of older language to describe African-Americans.

Show Information: ‘A Coffin in Egypt’ runs from November 15 to December 17, 2017, in repertory with ‘St. Nicholas,” at the Quotidian Theatre Company, Bethesda, MD. For more information, click here.