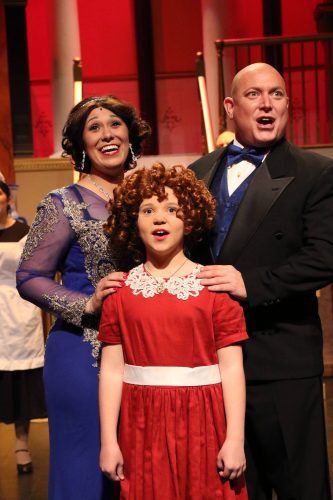 Easily one of the finest family musicals ever written, the music by Charles Strouse, lyrics by Martin Charnin, and book by Thomas Meehan, has all the ingredients of a good musical, including memorable characters, an exciting and heartwarming story, and singable songs.  And I’m not just feeding you a bunch of “cold mush!”   It’s been more than 40 years since the show’s Broadway opening in 1977, and the popularity of “Annie” has presumably helped to put its creators on “Easy Street.”

Directed by Stephen Napp, “Annie” is about a lovable red-headed orphan named Annie who is chosen by Grace Farrell to spend two weeks with Oliver “Daddy” Warbucks, a billionaire.  When Warbucks goes on the radio to try and find Annie’s “real” parents, orphanage matron Miss Hannigan (a hilarious Susan Schindler), her brother Rooster (a cunning Gregory Quinn), and his girlfriend Lily (a dizzy Melissa Ann Martin), devise a scheme to collect the $50,000 reward.

Easily one of the finest family musicals ever written…

A performance highlight featuring the orphans is the song “You’re Never Fully Dressed Without a Smile,” where they have fun mimicking radio personality Bert Healy and the Boylan Sisters.  Choreographer Jason M. Kimmell makes the dance fun, having the children perform box steps, soft shoe, and even some jazz hands and a kickline.  Adding to the enjoyment of the song is the live orchestra, musically directed by Kathryn Weaver, and featuring band members Eric Allard, Brandon Cave, Mari Hill, Chris Hutton, Jack Mansfield, Seth Rees, and Audra Ziegel.

In the title role of Annie is a very spunky and cheery Reese Bruning.  She belts out with great joy “Tomorrow,” and even gets “Daddy” Warbucks, President F.D.R., and his staff to sing along.

E. Lee Nicol gives a commanding performance as Oliver “Daddy” Warbucks.  What is more, his timing on the jokes is spot-on.  His solo songs “Why Should I Change a Thing” and “Something Was Missing” was heartfelt and moving.

Christina Napp gives a delightful performance as Oliver Warbucks’ secretary, Grace Farrell.  Besides being a superb singer, Christina Napp is effective at portraying a secretary who helps to keep Warbucks at the top of his game by staying calm, collected, and organized.

Towards the end of the curtain call, during the song “Tommorow,”  I was too choked-up with joy to be able to sing along with the rest of the audience.   Yeah, the magic of musical theatre does that to me sometimes.  Can you relate?