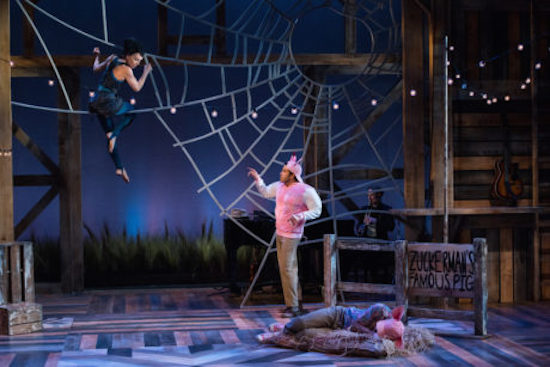 The beloved story “Charlotte’s Web” at E.B. White has been enthralling readers since 1952. The tale of the love between a pig named Wilbur and a spider named Charlotte teaches us the power of friendship and sacrifice. Its timeless farm setting is delightful for children and it’s intelligent and beautiful plot engage grown-ups.

Imagination Stage’s production of the classic story incorporates traditional American folk songs throughout, increasing the nostalgia of old timey farm living. The actors are also the musicians and they play and sing throughout the show. Meanwhile, Deborah Jacobson was visible through most of the show at the piano.

‘Charlotte’s Web’ is a beautiful story for the whole family.

Wilbur the pig was played by Timotheus German. He is a sweet and gentle actor who portrays the feelings of a little pig well. German brings a strong youthful energy to Wilbur. His love for Fern and Charlotte come through in all he does.

Charlotte was played by the remarkable Shanara Gabrielle. Doing the majority of the show on aerial silks and singing and acting, she was a spectacular sight. Gabrielle captured the grace and devotion that characterize this famous spider.

Wilbur’s unlikely friends at the Zuckerman’s farm include a goose and gander (Matthew Schleigh), the old sheep (Javier del Pilar), and Templeton the farm rat (Jonathan Feuer). The one who saved his life first, the little girl Fern, was played by Moira Todd. Each of these actors also played several other characters with ease and flexibility.

The set was a large wood barn that stayed present through the whole show, including Charlotte’s giant web. Designed by Andrew Cohen, it was quite gorgeous and aided in telling the story.

The clever costumes were designed by Robert Croghan. They allowed the actors to transition through their various characters well. The costumes also allowed for Gabrielle to move freely without being distracting.

“Charlotte’s Web” is a beautiful story for the whole family. It is a lovely choice for those who are less interested in holiday-themed events this time of year. It is a tale of love and a powerful tool for teaching about loss.