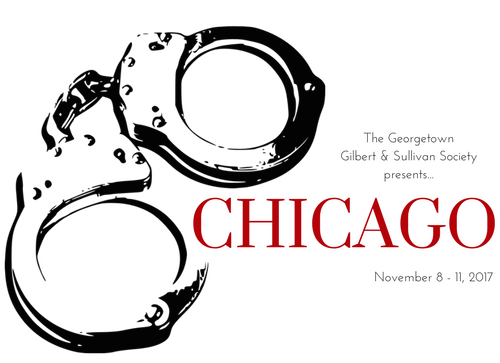 Possibly the most famous American musical, ‘Chicago’ has taken the world by storm since its original Broadway opening in 1975. People are fascinated by celebrity criminals and jazz culture. It is no wonder that The Georgetown Gilbert & Sullivan Society, which is specifically affiliated with the Georgetown University Law Center, would choose to do this landmark musical mocking the criminal justice system.

‘Chicago’ was written by John Kander and Fred Ebb, the masterminds behind such works as ‘Cabaret,’ Kiss of the Spider Woman,’ and ‘The Scottsboro Boys,’ just to name a few. The astounding choreographer Bob Fosse also worked on the book and choreographed the original production.

‘Chicago’ is guaranteed to be a fun night of theatre, whether you know the show well or have never heard of it before.

The story follows Roxie Hart, a disgruntled wife who wants to be a dancer in vaudeville. She murders her lover and ends up in jail where she meets Velma Kelly, a woman who had previously been a vaudeville performer before committing a double murder. Both of them are swept up in the glamour of achieving celebrity status.

Roxie was played by Emily Krulewitz, who brought a sassy juvenile feel to the role. She sang the role well and really shined during the monologue before “Roxie.” Melody Vidmar played Velma Kelly with a smooth and relaxed feel. She sang the part very well and proved her stamina in “I Can’t Do It Alone.” Both women are strong performers who share the stage with each other well.

The five other merry murderesses that Roxie meets in jail were made up of Margaret Lee, Sheya Jabouin, Shuang Wu, Geraldine Dávila, and Ariana Simone. Together with Vidmar they performed one of the most iconic songs from ‘Chicago,’ “Cell Block Tango.” These women each brought their own personalities to these characters. These women are always around. Lee’s character, Hunyak, or the Hungarian, can only ever get out the words “not guilty.” Lee gave a moving performance as she faced hanging for her crimes.

Lauren Berkebile played Matron Mama Morton, who takes care of the girls in jail. She has a sultry alto voice and strong energy on stage that made her performances especially delightful. Billy Flynn, the money grabbing lawyer, was played by Daniel Lakin. He was a wonderful combination of sleazy and dapper that makes audiences love Billy.

The choreography, by Gavin King, was just Fosse-esque enough to pay homage to the iconic original choreography but was also different and matched the aesthetic choices of this production well.

This production had many blue tones, which was an interesting design choice and refreshing to not see everything in black and red. The blues seemed to bring about a somewhat softer side. The costumes, designed by Zuri Blackmon were well made and followed the style of the early 1920s.

The set was designed by Jeff Asjes. It included a large, multi-level platform in the middle of the stage which was visually interesting on its own but also allowed the director, Allison Gold, to create some beautiful stage pictures.

‘Chicago’ is guaranteed to be a fun night of theatre, whether you know the show well or have never heard of it before. We can all enjoy a dark comedy now and then.