Theatre Review: ‘Christmas at The Old Bull & Bush’ at MetroStage 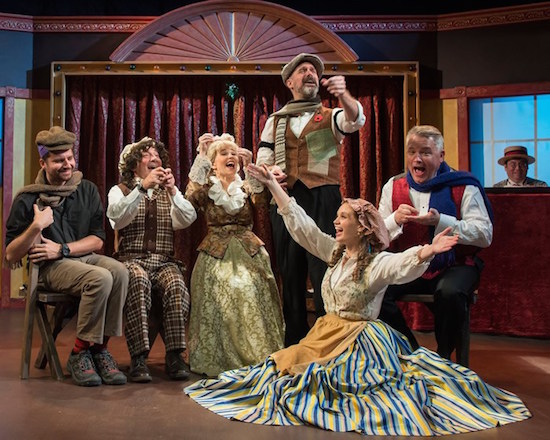 The holiday season is an easy excuse to hearken back to memories of Victorian times, what with the classic Dickens story permeating our brains. Cockney accents mugs of wine and holiday singalongs just go with merry ol’ England.

Thus, in a timely mashup of regional British music hall talent and MetroStage’s own Broadway Christmas Carol holdovers, we are presented with “Christmas At The Old Bull & Bush,” at MetroStage Theatre for the holiday season.

It’s a little song, and little dance, a little seltzer down your pants…

Before its rebirth here, the show has actually had quite a local run, appearing at the cozy Old Vat room at Arena Stage for a 6-year run. Alas, that was 14 years ago, and aside from the British Players productions in Kensington, MD, the area is in need of the unique music hall experience. Local MetroStage vets Tracey Stephens (playing the iconic music hall performer Florrie Forde)  and Peter Boyer join talents with the even more veteran group of music hallers in Brian O’Connor (Chairman) Albert Coia (Mr. Ramsbottom) and creator and director Catherine Flye, appearing in several scene-stealing moments.

The Brit music hall experience is a genre in itself, and the crème de la blood pudding is The Old Bull and Bush, a restaurant still in operation at Hamstead, London that was THE place to be to see the Saturday show, especially for the headliner, the large and larger than life Florrie Forde. Our diminutive Stephens takes her own turn as Florrie, regaling us with attitude and gentle leering, but it was a much tamer experience than the real thing, as is most of the goings on at MetroStage.

The concept is really a smorgasbord. Just keep on hitting the audience with characters, songs—both witty, gritty and pretty—the silliest jokes you can imagine (which can be the best) skits, and of course, sing-a-longs with the audience. Each can be hit or miss, the key being, something is coming round the corner, so hold on. The pacing and transitions between schticks could have been quicker for this reincarnation, as the players need to gauge the energy of the crowd. When the content is frothy nothingness, the pace must stay quick. It’s a little song, and little dance, a little seltzer down your pants…

But many standout scenes were in fine form. Albert Coia, with decades of music Hall experience, was the pickled, leering cockney character, gifting us with his “The Night I Appeared as Hamlet” and “My Little Yo-Yo,’ with all the wink wink entendres nicely delivered in his jaunty patter.

Boyle was in fine form especially with Stephens in pantomimes and his running gag about what the young lady said to the sailor, with each punch line augmented by a happy leer.

Bob MacDonald was in the crooner role, regaling us with his lilting pipes in “The Road to Mandalay” and a touching ‘Keep The Home Fires Burning.” This touching number recalls the famous incident of British and Germans sharing Christmas songs and festivities while in the trenches of WWI. Chronology aside (this show reenacts the events in 1912, three years before the event) this is an example of how foolishness surrounded by a profound moment can work.

Writer and creator Flye has kept some of the great staples of the music hall, of which there is so much material to choose from. Her scene as a schoolteacher where she directs the unseen children to prepare for nativity play was eye-opening “Stephen’ (she said disapprovingly) ‘you know you shouldn’t be touching yourself there right now.” Hilarious.

With nimble-fingered Joseph Walsh providing simple piano accompaniment and also doubling as music director, the audience had a grand time, especially with the singalongs.

Come and give it a go…

Running Time: 1 hour and 50 minutes with an intermission.