Theatre Review: ‘Crazy for You’ at Signature Theatre 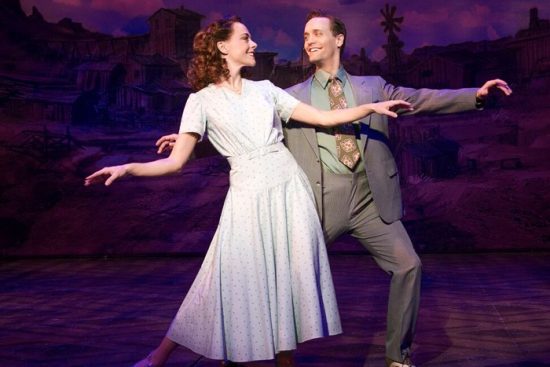 Ashley Spencer as Polly Baker and Danny Gardner as Bobby Child in ‘Crazy for You’ at Signature Theatre. Photo by C. Stanley Photography.

If you are looking for first-class entertainment this holiday season, then look no further than Signature Theatre’s tap-dancing, musical extravaganza, “Crazy for You!”

Featuring the songs of George and Ira Gershwin, the book by Ken Ludwig is about Bobby Child, a Broadway hoofer who is sent by his Mother (played by the incomparable Sherri L. Edelen) as part of his wealthy banking family to close a failing theatre in Deadrock, Nevada. After instantly falling in love with Polly, daughter of Everettt Baker (a believable Harry A. Winter), the proprietor, Bobby disguises himself as Hungarian impresario, Bela Zangler in order to save the theatre by putting on a show.

Danny Gardner is sensational as Bobby Child!  His thrilling tap dancing tricks and turns will literally make you say to yourself, “Wow!”  When the tap shoes are off, Gardner is also quite successful in the quieter moments such as the romantic and tender “Embraceable You” and “They Can’t take That Away From Me.”

Bobby’s romantic interest, Polly is played with zest by a lovely and appealing Ashley Spencer.  Her vocal rendition of “But Not For Me” came naturally from the heart and full of sentiment, playfully hesitating with the lyrics at times with great effect. What Polly doesn’t know is that Bobby has already been engaged for five years to Irene Roth (played by a strong, seductive, and saucy Natascia Diaz), a wealthy woman ready to take over the world and everyone around her.

Bobby Smith delivers a spot-on comedic performance as Bela Zangler, a Hungarian theatrical producer.  You will laugh until your belly aches when he…(Nope, not going to giveaway any surprises!)

A highlight of the show includes the song “Slap That Bass” where “happiness is not a riddle when I’m listening to that big bass fiddle!”  Here, a towns person named “Moose” isn’t good enough to dance in the show but is good enough to play the bass.  The rest of the talented ensemble dances away their troubles with the magnificent choreography by Denis Jones.  And yes, the ensemble has rhythm!

Everything about this production is first-rate, including the outstanding costumes by Tristan Raines, scenic design by Paul Tate Depoo III, and lighting design by Jason Lyons. And let’s not forget about the outstanding 14-piece orchestra, musically directed by Jon Kalbfleisch.

Expertly directed by Matthew Gardiner, Signature Theatre’s “Crazy for You” is first-class entertainment!  Who could ask for anything more!