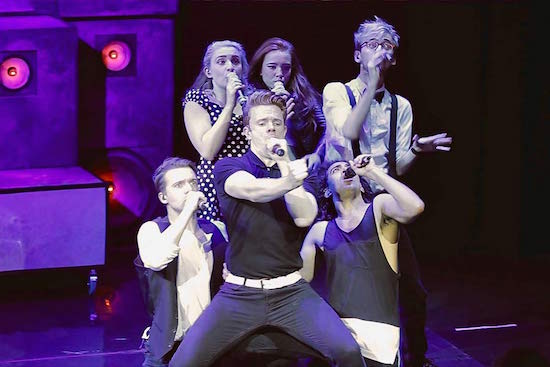 The cast of ‘Gobsmacked!’ Photo provided by The Kennedy Center.

What is it about a capella music that makes people smile? Even after the “Pitch Perfect” craze has died down, there is still something magical about watching a group of people sing complex music with no instruments besides their voices. “Gobsmacked!” is completely a capella show that got its start at the Edinburgh Fringe Festival and went on to successful runs in London and Hong Kong.

The show has a loose plot but everything is controlled by the Conductor, Ball-Zee. Ball-Zee is one of the UK’s leading beatbox artists today. He not only controls the singers but acts as the vocal percussion for their songs. He is electric and his stamina is incredible. During the second half, Ball-Zee was given a solo number where he got to show off just how skilled he is. This was a highlight and quite nearly brought the house down. Not only is he good, Ball-Zee had fun and seemed to make new discoveries as he played.

It was a fun night of music for young and old alike.

The singers had vague names but they were each incredibly strong characters and worked well together. The support on the stage was beautiful and they have built a tight ensemble.

The Man, Nicholas Hayes, started off really commanding the show. He sang the lead vocals of “Mr. Brightside” and “Shape of You.” Hayes is a strong performer with a sultry voice and dynamic magnetism. He had a leading man persona but easily shared the stage and did well in supporting vocal roles as well.

Marcus Collins was The Lad. He started out somewhat unassuming and then exploded with “Life on Mars?” and “Mr. Fahrenheit.” His voice is smooth and soars effortlessly through the air. He has great control over his instrument.

The one who holds everyone together is undoubtedly the bass who in “Gobsmacked!” is referred to as The Boy. Ed Scott was a remarkable bass who kept the group together and often had one-liners sprinkled throughout. Then in the second half he surprised everyone by jumping up into his gorgeous falsetto to sing the Prince hit “Kiss.” His incredibly wide vocal range was quite impressive and his charming personality make him a strong stage presence.

Emilie Louise Israel is a true vocal powerhouse as demonstrated in “Telephone.” Referred to as The Woman, her confidence and strength brought her into the role of a leader on stage. She was not only a great belter but was also able to effortlessly bring it down and sing gentle quiet ballads.

The Lady was Joanne Evans, who dominated the James Brown hit “It’s a Man’s Man’s Man’s World.” She captured the emotion of the song and let it come out in her commanding vocals. Her deep vocal tonality was beautifully sultry.

Monica Sik-Holm is an adorable performer. With her quirky dress and expressive reactions she owned the role of the Girl. Her big solo number was “Mercy” and she sang it with the gorgeous balance of gentility and power. She was a great member of the ensemble and added an element of sweetness.

The set, designed by Philip Gladwell, consisted of a back wall made up of large speaker cones with lights inside. The wall lighting design was done by Charlie Morgan-Jones. This made a wonderful backdrop for all of the moving around on stage. They also used two rolling staircases that the singers moved about the stage to create new stage pictures, aid in choreography, or draw attention to certain singers.

The show was almost entirely pop songs that would be recognizable, or beloved, by the general public. It seemed to me that the audience could not help but leave with a smile on their face. It was a fun night of music for young and old alike.