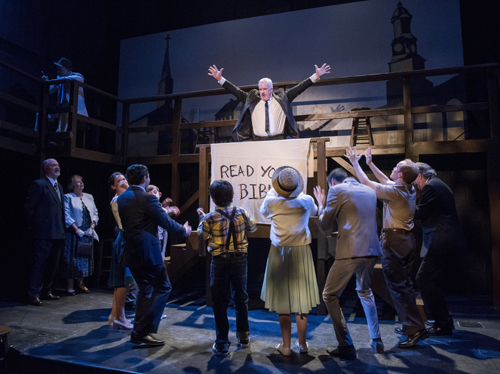 As controversy and culture clashes continue to escalate in the United States, the Compass Rose Theater couldn’t pick a better time for its powerful production of “Inherit the Wind,” the gripping 1955 play by Jerome Lawrence and Robert E. Lee inspired by the famous Scopes Monkey Trial. Although the drama directed by Lucinda Merry-Browne centers on creationism versus evolutionism, at its heart are larger ideas still relevant today—independent thought, freedom of speech, and tolerance for other people’s beliefs.

“Inherit the Wind” is a stirring and must-see drama that will make you stop and question just how much society has in fact evolved.

In “Inherit the Wind,” the small southern, God-fearing town of Hillsboro is up in arms. All the hullaballoo surrounds the fate of Bert Cates (played by an endearing Daniel Prillaman), a young schoolteacher who finds himself locked up awaiting trial after promoting the ideas of Charles Darwin instead of sticking to the scriptures of the Holy Bible. At the start, we see a confused and nervous Rachel Brown, portrayed by Katherine Boothroyd, a fellow teacher who also happens to be a preacher’s daughter visiting him in jail, while wrestling with inner turmoil as she tries to determine right from wrong. Both are convincing in their roles as they represent a new generation and the shifting perspectives emerging in their small, tight-knit community.

The Compass Rose Theater cast is superb, notably Don Myers as the zealous evangelical Reverend Brown, Gary Goodson as master politician Matthew Harrison Brady, and Andy Clemence as the big city attorney Henry Drummond. All of these gentlemen passionately embrace their parts, owning the strong, unyielding depths of their characters. Specific standout moments include Reverend Brown’s over-the-top sermon, Brady’s need for adoration throughout, and Drummond’s intelligent and witty examination of the witnesses. Andy Ingalls as the condescending, know-it-all reporter E.K. Hornbeck from the Baltimore Herald also keeps its entertaining with his snarky remarks and unabashed opinions.

Aesthetically, the intimate feel of the theater puts the audience in the thick of the action. Stage Manager Lauren Woehrer and Lighting Designer Marianne Meadows along with simple effects such as a looming ‘Read Your Bible’ sign transport onlookers from town to courthouse, while the genteel period looks of the fifties elegantly put together by Costume Designer Renee Vergauwen successfully capture a bygone era.

“Inherit the Wind” is a stirring and must-see drama that will make you stop and question just how much society has in fact evolved.

“Inherit the Wind” runs until November 26, 2017, at the Compass Rose Theater. For information and tickets to this performance, visit online.