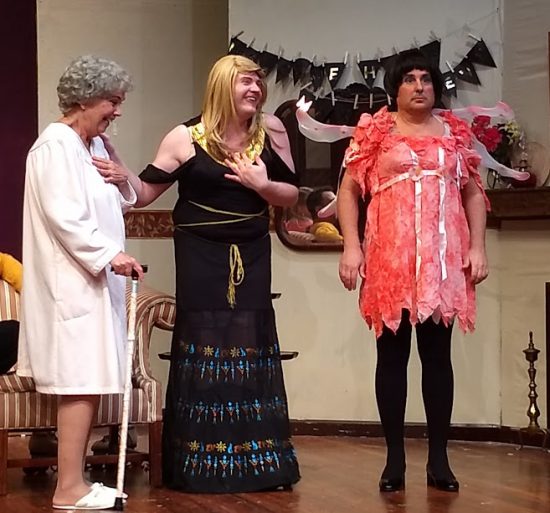 Salem Players, the Catonsville-based theatre company recently presented Ken Ludwig’s hysterical farce, “Leading Ladies.” Salem Players is celebrating its 40th season this year and this is a worthy addition to their repertoire.  I’m only sorry it took me so long to discover this little gem hiding out in the Salem Lutheran church.

Ludwig, whose plays include “Lend Me A Tenor,” has an impressive stable of work.  This piece cleverly draws on the dual-identity, gender-fluid themes in Shakespeare’s “Twelfth Night.”  The plot concerns Meg Snider, a young lady who dreams of a life as an actor spewing Shakespeare, who lives with her ailing, but feisty aunt.  Auntie is perpetually on the brink of death but has a tendency to rally when it suits her.  The 30 million dollars she’ll leave behind is of particular interest to one Rev. Duncan Wooley, engaged to the lovely niece.  Into this mix comes a pair of washed-up Shakespearean actors, Leo Clark and Jack Gable (Clark – Gable, get it?). They meet the busty and none-too-bright Audrey on a train, who mistakenly tells them about a rich old lady who has just died and the search for the aunt’s missing nieces who stand to inherit two-thirds of the 30 mil.  Of course, they decide to impersonate the nieces, who happen to be cousins of the lovely Meg. Also on the scene are the aunt’s doctor and Audrey’s boyfriend. To coin a phrase, hijinks ensue.

Salem Players is celebrating its 40th season this year and this is a worthy addition to their repertoire.

Directed by Scott Graham, one of the founding members of Salem Players, the production has some flaws, like the interminable scene changes.  Given that it’s a single set with an occasional curtain draw, the changes could have been a wee bit faster.  The smartly decorated set by Graham and company is well done and nicely lit most of the time.  Amanda Yerkey and Marleigh Toscano share lighting and sound design credits.  Dressing this cast was no mean feat, given that two guys are most often dressed as women.  Graham and the cast can take an extra bow for their efforts, as the costumes are appropriate and worn well by the cast.

Louis Miles as boyfriend Butch Myers was effective and well-cast. As crotchety Aunt Florence, Marge Ricci was as crusty as day-old bread and way more fun.  Tim Evans as Doc Myers overall did a fine job, particularly in his exasperation at Aunt Florence’s refusal to die already.  Katie Frey as Audrey was appealingly wide-eyed and sincere and has a mega-watt smile that lit up the stage.  And Mike Levin as Rev. Wooley gave a dedicated turn as a money-grubbing man of the cloth.

Ashley Gerhardt as Meg Snider reminds me of so many other professional actresses without ever being an imitation of anybody.  A singularly gifted entertainer, as at home with singing as she is dancing, her comedic timing is among the best in the city.  She’s more like Megan Mullaly this time out to outstanding effect.

Lenny Taube is a good solid actor and turns in a performance that he can be quite proud of as Jack Gable/Stephanie Snider.  Not to mention he has an impressive set of gams.  Taube can contort his face in several directions at once and all of them are funny as he -, I mean heck.  It was done in church, after all.

And Jim Gerhardt as Leo Clark/Maxine Snider is such a good actor and this part was so in his wheelhouse.  He’s funny and focused and had a physicality to his performance that must have left him exhausted.  Oddly enough, he looks just like a girl I knew in Montreal years ago.  But only as Maxine.  As Leo, he was all guy and that guy was terrific on stage.

I pride myself on being pretty tuned-in to the theatre scene in Baltimore.  But I have to confess that I was mostly unaware of Salem Players.  I won’t let that happen again and will look forward to seeing what they come up with next.  MD Theatre Guide offers our congratulations for 40 years of bringing theatre to the Greater Baltimore Theatre scene.  Here’s wishing you many, many more!

“Leading Ladies” plays through November 19, 2017, at The Salem Players— Salem Evangelical Lutheran Church at 905 Frederick Road in Catonsville, MD. For tickets call (410) 747-0720 or purchase them online.