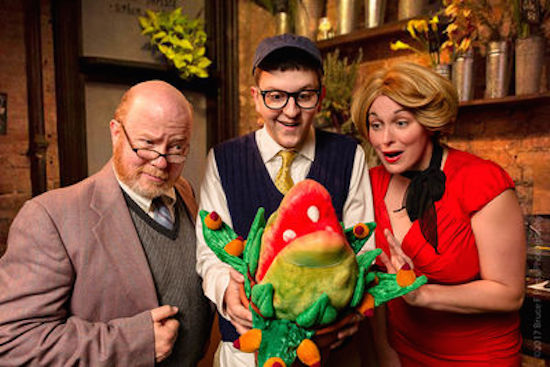 “Little Shop of Horrors” has been through a few iterations over the past fifty plus years.  First a low-budget film by Roger Corman, then an off-Broadway musical in 1982 with a book and lyrics by Howard Ashman and music by Alan Menken, then a film of the musical in 1986, a Broadway version in 2003 and now in countless local playhouses.  Lucky for us there’s a terrific production running now in Baltimore at Vagabond Players.

There is some disagreement about who penned the original storyline but the non-musical movie, directed by Corman way-back-when, set in motion a chain of theatrical events that have led to this enjoyable offering by one of the city’s most venerable theatres. It’s a silly story told with sincerity by an excellent cast and a top-notch production crew. Here’s the skinny:

Seymore Krelborn is a nebbish young guy living in New York on squalid Skid Row, in the back of a flower shop owned by Mr. Mushnik.  Audrey, his pretty, blond co-worker with the questionable fashion sense and even worse taste in boyfriends is Seymore’s crush.  When Seymore gets a weird little plant, nothing seems to help it thrive at first.  But when it gets a little taste of blood, it blossoms and immediately starts to grow into a demanding, controlling very un-plant like otherworldly entity with a determined mind of its own.  Along the way, we meet a trio of street urchins who act like an urban Greek chorus, a sadistic dentist, and a handful of characters who help propel the action to its inevitable conclusion.

How cool for us that we are treated to such a delightful production at the recently renovated Vagabond Players Theatre.

Directed with care by Eric C. Stein, this production includes some impressive technical elements, beautifully orchestrated by a well-seasoned director.  Stein has assembled a cast without a single weak link who follow his pace with precision. Stephen M. Deininger musically directs with skill, leading his six-piece (though with doubling it might have been five) pit band quite competently, despite his many turns out of the pit and onto the stage. His outstanding vocal direction is most evident in the trio of girls playing the urchins. Angela Stein does cleverly appropriate choreography for the entire group on stage. Charlie Danforth does his usual stellar work with lights and Joel Selzer has outdone himself with a wonderful revolving set that does double-duty as both the exterior and interior of the flower shop. Katherine Sheldon dresses the cast nicely in period-perfect costumes.

Kerry Simons provides the female in a few scenes, playing everything from a Skid Row bum to a society matron, and does it well.  John Sheldon as Mr. Mushnik is a lovable alta kaker with a streak of parsimony a mile wide. With his superb comedic timing, he always turns in a professional job. In his duet with Seymour, “Mushnik and Son,” he is a load of fun to watch.  Stephen M. Deininger handles a variety of characters, but none more vividly than Orin, the sadistic dentist.  In an exceptionally physical performance, he is hysterically scary and completely effective.  His singing voice is in fine form as well as displayed when he sings “Dentist.” In his other characterizations he is just as able, but as Orin we see more of his real acting ability.

Renata Hammond, Amber Hooper and Darlene Harris provide the narrative backbone of the story.  Each of them has a great voice, great dance moves and enough attitude to light up the stage every time they’re on it, which is a lot.  The trio provides back up on several numbers and scenes with Supremes-like panache and trade high notes and low quips like pros.

The killer plant, Audrey II owes its life to two actors. Torberg M. Tonnessen provides the plant’s physical manipulation, shifting the cumbersome puppet this way and that with deft skill. It requires the actor to stay inside the oversized puppet for most of Act II and I can only imagine how uncomfortable that must be.  Hats off to Mr. Tonnessen!  And Ryan Geiger is spot-on as the voice.  He growls and whines, howls and shines as the evil weed.  His numbers “Feed Me” and “Suppertime“ are highlights and had the whole audience hanging on every line. Gieger is a consummate actor and I look forward to seeing him every time he takes the stage (though this time I heard rather than saw.)

Quentin Patrick as Seymour and Ryan Gunning as Audrey (the girl, not the plant) are so danged cute together that it was all I could do to not shout warnings to them.  Gunning, as the sadder but no wiser girl, brings just the right down-trodden demeanor as the nice girl doing bad things with the wrong guy.  She sings her yearning little heart out in the number “Somewhere That’s Green.” And when she does the signature duet, “Suddenly Seymour,” her powerhouse belt is fantastic.  This is an actress who can sing with the best of them, act like she was born on a stage, and is lovely to look at while doing just about anything.

I remember how cute and adorable Quentin Patrick was as the little brother in Liberty Showcase Theatre’s “Bye Bye Birdie. “  Years later, he is no less cute and even more adorable as Seymour Krelborn.  With his black glasses perched precariously on the edge of his nose, this tall, lanky kid is the quintessential Seymour.  Self-deprecating and shy, the character is tailor-made for Patrick.  He plays pathetic with a skill level that belies his young age.  I loved his singing voice, especially on “Suddenly Seymour.”  And I had to grip my chair to keep from rushing on stage to save him from the bad guys and plants, or just to give him a hug and tell him everything would be ok.

“Little Shop of Horrors” is becoming standard fare in any locally produced theatre company’s repertoire.  How cool for us that we are treated to such a delightful production at the recently renovated Vagabond Players Theatre.