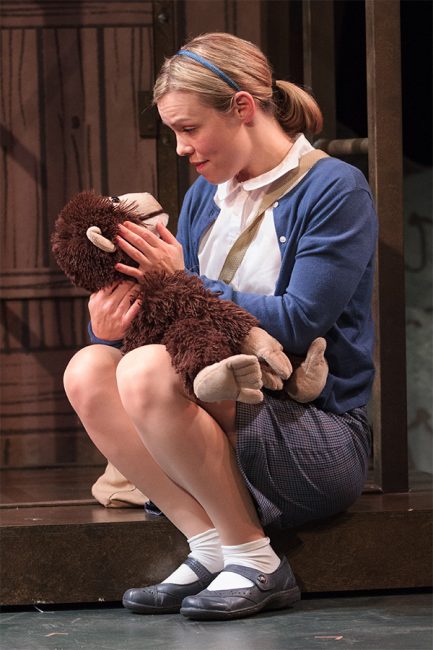 The Kennedy Center is now presenting a newly commissioned musical entitled “Me… Jane: The Dreams & Adventures of Young Jane Goodall” based on a biographical children’s picture book of the same name by Patrick McDonnell about the groundbreaking chimpanzee expert. McDonnell adapted his book for the stage along with Andy Mitton (who also wrote songs and lyrics) and Aaron Posner, who also directs.

… the animated scenery backgrounds throughout the show were fantastic and one of the most successful pieces of the show.

I was excited to see this children’s production performed in the Kennedy Center’s Family Theater especially as I used to teach music in the public school system. I was rooting for the play to succeed and I was anticipating a wonderful show based on the many educational materials that we were presented with prior to the show. The walls of the lobby displayed many cartoon jungle animals interspersed with a timeline of Jane’s life.

Large postcards for parents to take home were available – one with engaging post-show questions to discuss with your child on the way home and another with extension activities called “Project Squirrel” for children to do in their own neighborhood to practice using Jane’s scientific observational skills.

Not only that, but we were presented with a lovely full color “Cuesheet” Performance Guide upon being seated which included illustrations from the “Me… Jane” picture book as well as interactive activities to prepare young viewers for the show. The Cuesheets are available on the Kennedy Center website and I highly recommend using it with your child ahead of time.

The quality of the pre-show materials was so high due to the engaging questions and age-appropriate presentation of materials that I was very hopeful for an equally kid-friendly show. Unfortunately, that was not the case.

Lest I sound too harsh, let me assure you that the actors all did a fine job with the singing, acting, and dancing. Many of the actors played multiple roles, such as chickens, chimpanzees, dogs, and nasty neighbors. Standouts were Erin Weaver as Young Jane and Awa Sal Secky most notably as a chicken but playing multiple roles throughout the show.

Also, I will note that my viewing companion (who was an adult) was delighted with the show and thought that it was wonderful and I think that many of the adults in the audience enjoyed the show. I loved the “Doctor Who” joke that they snuck in. Additionally, the animated scenery backgrounds throughout the show were fantastic and one of the most successful pieces of the show.

But as an educator who has worked extensively with elementary school-aged children, I must say that the show has some problems in relating to its young viewers. The hour-long show has 14 songs and song goes into song without any joining dialogue. For small viewers, this quickly becomes tedious and their attention was clearly waning throughout the show.

Little listeners need dynamic dialogue and action to break up all the music and help them re-focus on each new song. What small spoken text there was in the play was narrative rather than dialogue between characters. Again, as a teacher, I have to advise that “telling” is not “teaching” and the major points of the story were getting missed by the children in the audience because the long strings of quick facts were going over their heads.

Additionally, while the songs were catchy and had quite clever lyrics with many good messages, the songs were very wordy, which when combined with many difficult vocabulary words went over the comprehension level of the children which added to their audible restlessness throughout the show.

I believe that the show would have been much more successful with a more dynamic storyline with lots of true-to-life action, dialogue, and visuals that would teach by example the “big ideas” that the story was trying to convey. I also think that fewer songs with simpler lyrics and messages would have kept the children’s attention better.

Personally and professionally, I had too many problems with the play to recommend it. However, my adult companion enjoyed it quite a bit and I believe that many of the other adults in the audience liked it as well. I would strongly suggest that if you do take a child to the performance that you obtain the Cuesheet well in advance of the show and go through the activities in it with your child to help them understand more of the story. I also advise you to be prepared that your children may become quite restless throughout the show.

“Me… Jane: The Dreams & Adventures of Young Jane Goodall” is playing at the Kennedy Center Family Theater through December 10, 2017. For more information, click here.