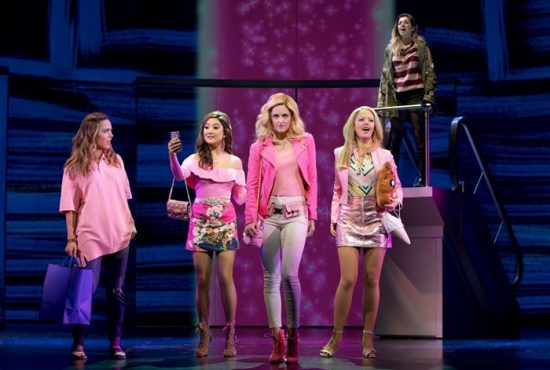 To many of a certain generation, the film “Mean Girls” was not just a movie, but a cultural phenomenon. The endlessly quotable lines, the iconic performances, and the honest representation of the challenges of navigating high school relationships struck a chord with audiences. That’s why when this reviewer first heard that it was being adapted into a Broadway musical I was ecstatic… and aprehensive. Could a musical capture the same zeitgeist as the film I loved so much? Would a musical retelling ruin a classic? I’m happy to report that the answers to those questions are “yes” and “no” repectively- “Mean Girls” can most definitely sit with us.

“Mean Girls” is an enjoyable romp with heart, just enough of the original story with plenty of new life infused. In short, it’s just so fetch.

For those of you home schooled jungle freaks that don’t already know the plot, “Mean Girls” is the story of Cady Heron (Erika Henningsen.) The daughter of two research zoologists, Cady spent most of her childhood in Africa, missing out on most of the common experiences of they typical 16 year old. However, this all changes when her parents move to Evanston, IL and she enrolls in North Shore High. She meets the “Art Freaks,” Damien (Grey Henson) and Janis (Barrett Wilbert Weed), who introduce her to the rest of the cliques, none more powerful than the “Queen Bees.” Dubbed “the Plastics,” Gretchen (Ashley Park), Karen (Kate Rockwell,) and Regina George (Taylor Louderman) rule North Shore High. When they take a sudden interest in Cady, Janis sees an opportunity to take her 8th grade revenge on the “scum sucking road w*ore,” Regina. Then things start to get really interesting. Fascinatingly, “Mean Girls” was actually adapted from a non-fiction book written to help parents assist their daughters navigate “girl world,” and was largely seen as unadaptable. But they clearly underestimated the indomitable Tina Fey.

The experience of the musical begins right away- the stage is open, with an incredible LED background displaying rotating entries of the “Burn Book,” the book where the Plastics write nasty comments about other girls in their grade. The background is utilized brilliantly throughout the show, with wide, movable panels effortlessly becoming the cafeteria, then the girls bathroom, the gym, etc. with some extra set pieces, like desks, lunch tables, and bathrooms stalls on wheels to supplement. In addition to simple set background, these ingenious panels also offer up some hilarious visuals that you have to see to fully appreciate. (Scenic Design by Scott Pask.)

For super-fans like myself, I’m happy to report that some of the classic lines are included in the musical: my personal favorite comes from Damien: “Danny Devito, I love your work!” However, I feel that one of the things that makes the musical successful is that it does not shy away from breaking new ground. For example, the setting is now, not the present of the film in 2004. Iphones abound and some of the references have been updated: Cady thinking Ashton Kutcher is a band is now her thinking Gigi Hadid is a food. One favorite addition is when Gretchen compares herself to an iphone without a case, “I know i’m worth a lot, and I have some great functions, but I feel like I could just shatter at any moment.”

The strongest suit of the show is definitely the casting. Henningsen shines as the wide-eyed Cady, turning in a believable evolution as Cady is “socialized.” Louderman establishes herself not only as a queen bee, but queen of the film adaptation musical; she turns in an amazing mean girl performance,  and she recently starred on Broadway in film adaptation musicals “Kinky Boots” and “Bring it On: The Musical.” Her voice soars and her comedic timing is impeccable. Park brings new dimension to the Gretchen Wieners character, her powerful voice, hilarious delivery, and sharp dance moves combining for a standout performance. Rockwell takes a character that could be a one-note caricature and infuses real heart and comedy into the intellectually challenged Karen.

Wilbert Weed and Henson slay as bff’s Janice and Damien- both have incredible talent, but perhaps the most impressive aspect of their performance is that, along with Henningsen, they really convey a true connection. Their friendship seems authentic and the connection never seems forced. You believe the progression of the story because you as an audience member would want to be their friend too.

Kerry Butler does incredible triple duty as Mrs. Heron, Mrs. George, and Ms. Norbury, though you would never know these characters were played by the same person if not for the program. Not only are each of the three characters styled completely differently, Butler is able to completely transform herself in each role. She channels Kyra Sedgwick, Amy Sedaris, and yes, Fey herself, effortlessly.  Kyle Selig turns in a perfect performance as teen heartthrob Aaron Samuels and Cheech Manohar channels the bad a*s MC/math enthusiast Kevin G.

Since this is a pre-Broadway tryout and things can be changed, there wasn’t a definitive list of songs in the program. However, the songs that I saw in my performance were catchy, expertly performed, and moved the story forward effectively. Some personal favorites were “Stupid in Love,” where Cady expresses her “calculust” for Aaron and laments that love doesn’t come as easy to her as math, “Whose House is This,” where Cady’s small get-together gets out of control, and my personal favorite, “Revenge Party,” which tracks the plot hatched by Cady, Janis, and Damien to destroy Regina’s life. (Music by Jeff Richmond and Nell Benjamin.)

The choreography is also inspired, as even though it is sharp and high level, you could definitely see the moves as something 16 year olds would do at a party. The same goes for costumes; while they are heightened versions, you could believe them as real clothes for teenagers. Finally, Tina Fey does it again with a story that simultaneously cracks you up.

“Mean Girls” is an enjoyable romp with heart, just enough of the original story with plenty of new life infused. In short, it’s just so fetch.

Advisory: There is some foul language, so the show is recommended for ages 12 and up.

“Mean Girls” is now playing in a limited tryout at The National Theatre through December 3rd, before it moves to Broadway.  For information on tickets click here.