Theatre Review: ‘My Name Is Asher Lev’ at 1st Stage 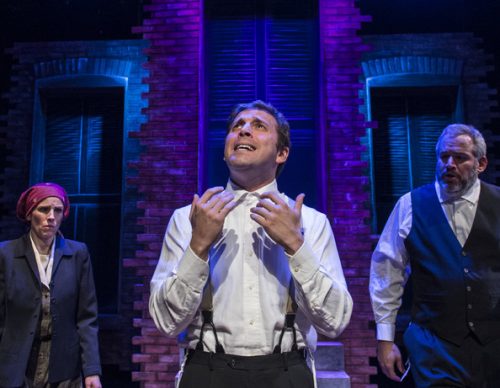 What do we owe the previous generations? What do we owe ourselves when we are born with a driving imperative? Is there a way to honor both? Is the pain inevitable? How do we choose and survive?

These questions and more are brought to heart-searing life in “My Name Is Asher Lev” at 1st Stage Theatre in Tyson’s Corner, VA. As written by Aaron Posner, directed by Nick Olcott, and brilliantly and subtly acted by Lucas Beck, Andy Brownstein and Hula Matthews, these questions are as raw and relevant today as they were when the play was set, in 1950s Brooklyn, New York.

…in  his world there is color and light and darkness and pain and possibility and hope–above all, there is hope.

What do you do when you are a born artist and a Hasidic Jew, born to parents who are intensely involved in creating places for Jews to survive and thrive after the horrors of World War II? If you are Asher Lev you try to stay true to both worlds–the sacred and the profane–and to yourself. But at some point, a choice must be made. In his world, you feel intensely the weight of generations of Jews reviled and pushed out of mainstream society. But also in his world, there is color and light and darkness and pain and possibility and hope–above all, there is hope. Asher Lev interacts with the world through his painting, an imperative so strong that he cannot survive without it. Yet pursuing his true self may raise an impermeable barrier between him and his parents. No one is at fault, yet no one will survive unscathed either.

Lucas Beck plays Asher Lev from about 6 to young manhood and does so brilliantly. It is a bold move and one that works. He becomes physically smaller (at times with the help of some low stools) but also embodies the honesty that children have when questioning how the world works. As he reaches 13 and is sent by the rabbi to study with Jacob Kahn, a great Jewish artist although not religious, you feel the amazement and discomfort at each revelation of this goische world he is introduced to. And you feel the sorrow and pain as he moves beyond his childhood world and the Hasidic world because as an artist he has no choice. To not reach beyond would be his ultimate lie.

Andy Brownstein plays Aryeh Lev, Asher’s father; Jacob Kahn the painter; The Rebbe; and Yaakov Lev. And he invests each role with a completely different persona and each is so realistic and so physically altered for each character that you almost want to check the program to be sure this is the same actor. Each part is nuanced and wholly of itself.

Hyla Matthews plays three very different women, including Rivken Lev (Asher’s mother); Anna Schaeffer (a gallery owner who recognizes the 13-year-old Asher’s brilliance); and Rachel (a nude model). So adept is Matthews at embodying these three very different women that when she appears as Rachel, a young, vibrant woman in a kimono, it’s breathtaking. There is a very kind moment when, with her back turned to the audience, she slides the kimono from her shoulders and to her shoulder blades, and in her complete matter-of-factness, guides the young artist into a different perception of the human form–in it’s perfection as a blessing from God and not as an object of temptation. As Asher’s mother, Ayreh Lev’s wife, and Yaakov Lev’s sister, she perfectly encapsulates these very different relationships.

The direction, by Nick Olcott, is subtle and nuanced. He takes Posner’s brilliantly-written story and allows it to breathe. He is ably assisted by set designer by Jessica Cancino who in five different platforms creates the dining room, the father’s study (and the mother’s much small desk), the artist’s studio, and the steps and windows of a Brooklyn brownstone. The lighting design by Kristin A. Thompson is a revelation of the working of Asher’s mind, and eventually, it dawns on the audience that the three large, paned windows are an embodiment of the three crosses on Calvary, which Asher eventually uses to unleash devastating truths.

Running Time:  90 minutes without an intermission.