Theatre Review: ‘Nothing to Lose (But Our Chains)’ by The Second City at the Woolly Mammoth Theatre 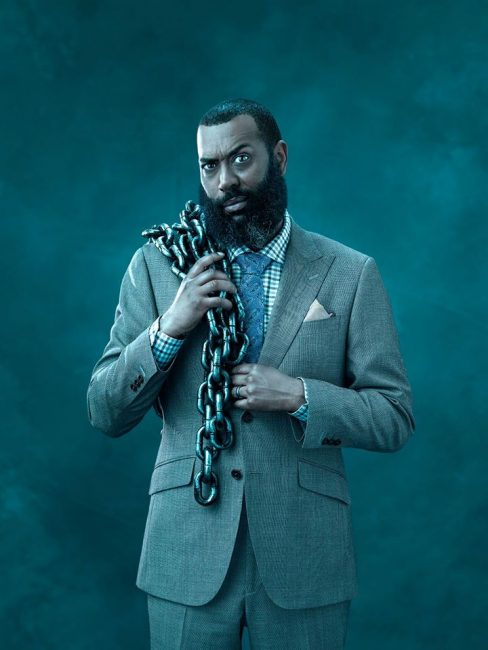 Now in its 38th season, the Woolly Mammoth Theatre Company maintains a legacy of presenting contemporary, thought-provoking, and always entertaining productions to its Washington, DC audience. Having partnered with Chicago-based comedy club, school of improvisation, and theatre company The Second City, Woolly Mammoth continues its effort to tell stories that, no matter how important or impactful they may be, aren’t often told.

On Friday, November 17th, the Woolly Mammoth Theatre Company, in partnership with The Second City, presented its second show of the 2017-2018 season:” Nothing to Lose (But Our Chains).” Those knowledgeable of African-Americans’ (far too long) struggle for equal rights in America may recognize the title as a portion of a quote made famous by the notorious civil rights activist Assata Shakur in which she stated:

Starring the hilarious and hyper-aware Felonious Munk, “Nothing to Lose” is an autobiographical account of drug dealer/former inmate-turned comedian, social activist, and TV personality Felonious Munk’s life. The story follows Felonious (as himself) and his conscience (Odinaka Ezeokoli) as they relive and make sense of the choices that have led Felonious down the (at one point in time) tumultuous, downward spiral that may be commonly referred to as his life. What led him to sell drugs as a teen? To become emotionally unavailable and cut himself off from the (apparent) wave of black women who loved him? Why did he make that fateful decision to use his power (in the form of a gun) to force a man to strip naked, run down the street, shoot him in the behind six times, then steal an innocent bystander’s vehicle? Was it nature? Or could it have possibly been nurture? Or maybe it was his mother who became pregnant as a teen and, therefore, lacked the necessary faculty and wherewithal to properly care for a human being… Yeah, it must’ve been her fault… “Nothing to lose,” in all of its comedic glory, tells the very complicated, and very true, story of a black man in late twentieth/early twenty-first century America who, as a result of self reflection (and quite possible the unnerving realization that black America’s fight for equality did not end with the Civil Rights Movement), refused to allow his less than ideal circumstances prevent him from living a life full of love, laughter, and prosperity.

As Felonious Munk couldn’t have pulled off this production alone, ensemble members Angela Alise, Mckenzie Chinn, Calvin Evans, and Odinaka Ezeokoli joined him in this very necessary production. Each cast member brought a level of depth to the production that made it that much better to experience; from Alise’s portrayal of Munk’s mother; to Chinn’s portrayal of every black woman that ever was; Evan’s comedic timing was spot on, and Ezeokoli’s Jimini Cricket-esque conscience character reminded us that we don’t necessarily have to look outside of ourselves for true redemption from our accumulated wrongdoings – It’s up to us whether we decide to listen.

I’d be remiss if I failed to mention McKenzie Chinn’s gorgeous monologue that closed the show. She beautifully articulated that which, I’m sure, every black woman has experienced a time (or two, or three, or four) in her life: although we may not ever dissuade any man or woman from calling us “queens,” we are women first who, like everyone else, just want to keep our credit scores decent and breathe.

“Nothing to Lose (But Our Chains)” is deep… How does one literally pour out his entire life for the consumption of a rather large group of strangers in order that they may laugh at his shortcomings? How, exactly, does one relive the very moments that, night after night, us mere humans strive to bury and vow to forget? I have to applaud Felonious Munk for having the strength and self-confidence to tell his story in order that he may be the inspiration for a countless number of young black men and women to begin down the path toward self-love and respect. But I also have to applaud him for forgiving his mother; she did the absolute best she could.

Running Time: One hour and forty-five minutes with one intermission.

“Nothing to Lose (But Our Chains)” runs through December 31st, 2017 at the Woolly Mammoth Theatre Company. For tickets and more information, click here.