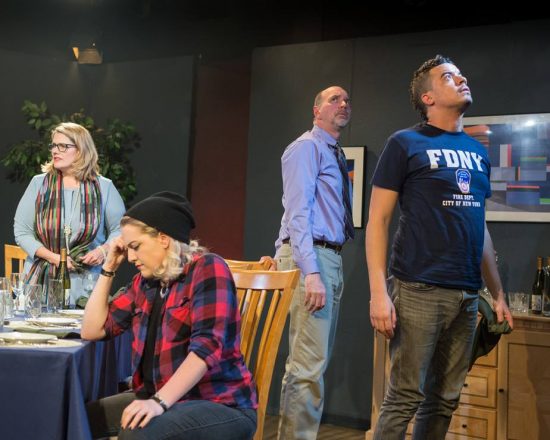 Dinner parties can sometimes be hell. In “Omnium Gatherum,” the dinner party takes a bunch of twists and turns at the Silver Spring Stage. It slowly dawns on the audience that something is terribly off. Susie, deftly played by Wendy Baird, is the hostess who is giving the dinner party. She describes each course in lush, sensual terms, only to serve empty plates, wineglasses and bowls. That, coupled with the red flare of menacing light coming from a hallway leading to the kitchen and bathroom, clues one in that this is no ordinary dinner party.

“Omnium Gatherum” was written by Alexandra Gersten-Vassilaros and Theresa Rebeck, and was first read at Actors Studio, New York City. It was originally produced off-Broadway by Robert Cole and Joyce Johnson in association with Jujamcyn Theaters, Charles Flatman and Kerrin Behrend. It premiered in the 2003 Humana Festival of New American Plays at Actors Theatre of Louisville.

…thought-provoking and a cry for understanding and tolerance.

The setting is after 9/11 and the dinner party consists of Roger (Keith Cassidy), a wealthy, highly-successful and conservative author; Julia (Karen Elle), an African-American woman of accomplishment; Jeff (Justus Hammond), a firefighter; Khalid (Lou Pangaro), a Muslim intellectual who tries desperately to enlighten the fellow diners of the historic underpinnings of the event and what could happen if change is not embraced; Lydia (Leigh Rawls), a vegan liberal who embodies despair; and Terence (Ken Scudder) who is a British wit and bon vivant in the vein of Oscar Wilde. The final guest, who appears in the last 20 minutes, Mohammed (Omar LaTiri), is introduced as the token terrorist. Susie presents him with great fanfare. His character provides the reality of the differences between East and West.

The guests gather to eat and debate—and do so with gusto. Ably directed by Bill Hurlbut, the guests argue and try to find common ground, any common ground. Their biases are on full display, except for Jeff, who has little dialogue and is treated as a nice, but not so smart, hero; yet he is the first to realize they are all dead. Secrets come to painful light, and even in death, the characters cannot fully embrace each other’s humanity.

The cast did a very decent job of trying to find some complexity in some very one-note characters. As Susie, Wendy Baird seems to be channeling an amped-up Martha Stewart. She is fierce in trying to provide an unforgettable meal and keeping it on track while the guests grow more unruly and their emotions start overtaking their duties as guests. As Roger, the conservative, rich author, Keith Cassidy speaks for all white privilege while trying to adhere to such modern niceties as no smoking at the table. He nicely balances the bullying posture with a realization that his world has changed and he doesn’t fully understand why; one feels for his confusion. Terence, the intellectual who hides his real emotions under a barrage of quips, bon mots and lots of drinking, is ably played by Ken Scudder, who adds a real gusto and zest for the finer things in life even as he feels them slipping away.

Don Slater provides the dramatic lighting sequences—that red flare of light is jarring, particularly since Susie, as a sort of demented uber-hostess, pays it no mind, even as it becomes more fixed in the characters’ minds as an omen. It’s a brilliant piece of design underscoring the futility of clinging to old ways of thinking.

The dining table, set at an angle and the characters’ chairs, also set at angles, underscore the guests’ apartness. The set was also designed by Don Slater. It works well in a theatre with no center section, as the audience is seated either house right or house left due to a load-bearing beam in the room that anchors the stage.

The play is thought-provoking and a cry for understanding and tolerance. The actors own their roles with intelligence and vigor. It made for a pleasurable Saturday evening and the discussion lasted long after the cast members took their bows.