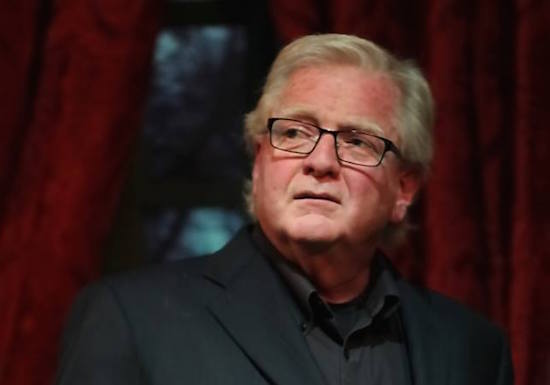 A story of loss, betrayal, a fall, possible redemption–all told in a lilting Irish brogue as a theatre critic faces an unknown audience and tells his story of hubris and pain. Like many Irish stories, there is a strong element of the supernatural in this one; at times it almost seems as if the tale is part of a fever dream. What is real and what is not become so entwined that the only reality is the critic’s crisis of conscience and his (maybe?) resolution.

…a deeply personal story and an object lesson…

“St. Nicholas” is a two-hour monologue featuring Steve Beall as “A Man.” He is never named; he is an archetype; he is the embodiment of a tale as old as Gilgamesh. A Man tells us the story of his success, his failures, his choices, and possibly, how he redeems himself. The ending is ambiguous; but then so is the beginning, because while A Man takes full responsibility for his fall from grace and his betrayals, he doesn’t offer much insight into his background. It is a deeply personal story and an object lesson on how little steps can lead to ruin.

“St. Nicholas” is directed by Jack Sbarbori, who also handled set/properties design, costume design, and set construction (with John Decker). The flocked-looking wallpaper and red velvet-upholstered furniture has a genteel poverty look and seems a fitting backdrop for a man who has lost so much. The director wisely allows the tale told by Beall to take center stage. Don Slater designed the unobtrusive lighting, which was perfect for a weary man confessing his sins.

“St. Nicholas” is by Conor McPherson who has written 17 plays between 1992 and 2017, and numerous films. He was nominated for a Tony Award for both “Shining City” and “The Seafarer,” and won a New York Drama Critics Circle Award Best Play for “The Night Alive.”

Running Time: About 2 hours and 15 minutes with a 15-minute intermission.