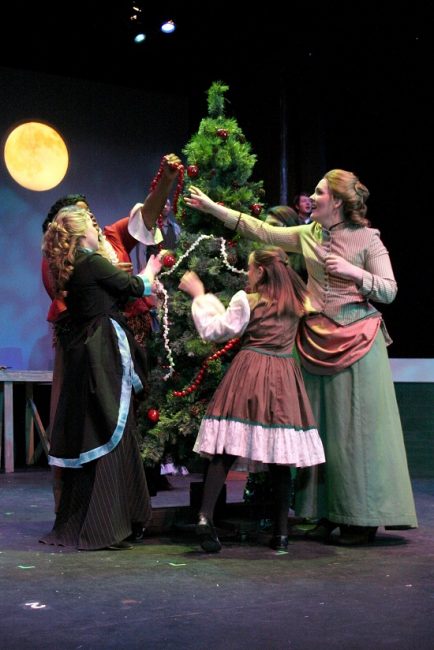 The cast of ‘The Christmas Schooner.’ Photo provided by PTP.

When most people think of Christmas, usually a Christmas tree is a part of the image that comes to mind. Tannenbaum is the German name for a Christmas tree. Most of you may have heard the famous carol “Oh Christmas Tree” or “Oh Tannenbaum”, but never has that infamous tree meant so much or seemed as special as it does in the Port Tobacco Players production of “The Christmas Schooner.” What begins as a simple story about a German shipping captain, his family, and his schooner soon shifts into a heroic journey to reunite the German immigrants in Chicago with the beloved Tannenbaum of their traditional Christmas. This story reminds us that it is not the tree, but what it means and the story it tells, that matters.

Port Tobacco Players (PTP), in La Plata, MD, has chosen yet another wonderful script to put on as their holiday play, showing Friday – Sunday until December 17th. The playwright, John Reeger, has cleverly intertwined the history of the Christmas tree in America with lovable characters, masterful comedy, and heartbreaking moments. The composer/lyricist Julie Shannon captures the rise and fall of the story within the music/lyrics exquisitely, taking the audience on a journey through music and song. As the story builds, the audience will fall in love with Gustav Stossel, portrayed magnificently by Rick Wathen, as he struggles to hold onto the old traditions of Germany in spite of his daughter-in-law Alma’s wishes to be firmly American. They will laugh along with the familiarity of dysfunction and the comedy of this wonderful family, composed of three generations and the ship’s crew, and will find themselves on the edge of their seats as Peter Stossel endeavors to bring Christmas trees to Chicago in the end of November without any promise of a warm welcome.

The only word that can do this show justice is the word ‘powerful’! This story is powerful, the characters are wonderful, and the music is goose-bump worthy.

Mike Mickey, as Peter Stossel, portrays a wonderfully average merchant with an unusual dream, and a dedication that will lead to many difficult journeys. Rachel Escolopio, as Alma Stossel, brings both humor and heartfelt emotion in her character to balance out the men in her home, and plays a beautiful mother to young Karl Stossel (Lukas Righter). Chloe Lateulere catches the audience’s eye as Martha from the first song with her commanding stage presence and beautiful soprano voice, and did not fail to amaze with every moment on stage.  In fact, the ensemble in general held as equal a role as any of the main characters, and did not fail to deliver a moving performance. They sang with great purpose and delivered each note crisply.

It may be a young cast, with most of the ensemble and cast members not older than 30, but they some of the most poised and practiced performers I have had the opportunity to see. The cast left us with a show-stopping performance of “What is it About the Water?” in Act 1, and I had chills! I was amazed to hear the harmonies carried with ease, and how the six-piece orchestra filled the theatre with their glorious accompaniment. The only word that can do this show justice is the word ‘powerful’! This story is powerful, the characters are wonderful, and the music is goose-bump worthy.

I had never encountered “The Christmas Schooner” before, and I certainly regret having not heard of it after seeing PTP’s production. It is a beautiful story with incredible music and a powerful message. Director Tessa Silvestro certainly knew what she was doing when she led this cast to opening night. The set, designed by Chris Magee, is minimalistic but adds the perfect amount of setting to each scene while allowing for swift transitions. The transitions were choreographed beautifully, with the lights fading and the set transforming almost in complete synchronization, and the story moved along at a perfect pace. The choreography in the show was cleverly detailed (kudos to Benjamin Simpson) right down to the turn of each character’s head. I was left with goose-bumps at several moments due to the perfection of cutoffs during songs and the well-timed movement of the actors. Their actions and silence communicated just as much as the dialogue and music.

Truly, the only critique I have for the theatre would be in the costumes. While the costumes were lovely, I was confused as to the period and style they were trying to capture. The men’s shirts varied from Renaissance sleeves to plaid patterns, and one young man went the entire show with his sleeves rolled up. The women’s dresses varied from sporting bustles to full skirts to fitted skirts. The costumes do not take away from the powerful performance, but they certainly left me wondering what period in which the story took place.

“The Christmas Schooner” is about family, about tradition, and about stories. It is a heartwarming tale about a brave captain who decides to share his Christmas trees with people in Chicago and passes on more than just a tradition. As the holidays approach, each and every one of us has our own ways of celebrating them. Some of us have symbols, like the Tannenbaum, that remind us of our past or connect us to our traditions. Each one of us has our own story to tell. As the show reminds us, we all have our stories and our songs. As Peter Stossel and many other brave captains like him did for the people of Chicago, let us do for those in our own backyard. Let us pass on our traditions, our journeys, our hopes, our stories. Maybe you might just make “The Christmas Schooner” a part of those traditions this year.

Advisory: There is some language in the production, although nothing abnormal for the time period, and a few moments of ‘adult’ humor. The story darkens in the second act, and young children may not understand some of the story-line. There is also the use of strobe lights in the middle of Act 2.

“The Christmas Schooner” will be playing at Port Tobacco Players in La Plata, MD until December 17, 2017. For more information, or to purchase tickets, please see here.