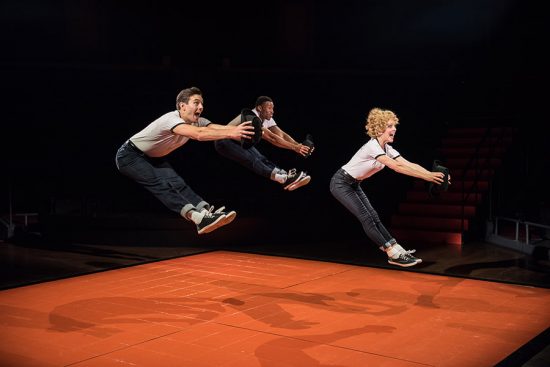 Ella Fitzgerald fans will undoubtedly be familiar with her great Broadway covers of “Hernando’s Hideaway” and “Steam Heat” and thanks to Arena Stage’s revival of the 1955 Tony Award winning musical “The Pajama Game,” devoted Ella fans can witness these numbers in their original setting along with many other great tunes and energetic choreography.

…Nancy Anderson’s stunningly hilarious routine at “Hernando’s Hideaway” leads me to strongly recommend that you don’t miss her performance.

By far, the vintage 1950’s costumes were a stellar highlight of the show. From classic work smocks over everyday dresses to A-line full skirted party dresses, high-waisted tailored shorts, and of course, plenty of old-fashioned pajama stylings, Costume Designer Alejo Vietti blew me away. The attention to detail on the garments was lovely, from intricate ribbons to ruffles, and the representation of so many 1950’s dress styles was a feast for the eyes. Equally wonderful was the fashionable handiwork of Wig Designer Anne Nesmith who had styled several vintage bobs with elaborate curls.

Set Designer James Noone is also to be commended for his fantastic findings that pulled me into another era. The seamstresses at the pajama factory each had a vintage Singer sewing machine – they may possibly have been reproductions rather than originals, but it delighted me that they all ran and that the whirring machines were cleverly woven into the songs and choreography. Another charming touch was a retro Coca-Cola machine from which an actor actually pulled a glass Coke bottle.

The scene-stealing star of the show was clearly actor Nancy Anderson as secretary Gladys Hotchkiss. Anderson gave us a Marilyn Monroe-inspired performance as the ditzy blonde secretary who’s much smarter than most of her colleagues think. She was wonderful in Ella’s “Steam Heat” number, but her most shining moment was her hilarious and dramatic solo in “Hernando’s Hideaway” which led into some truly great comedy bits as she then overindulged at the club.

I also enjoyed the performance of Blakely Slaybaugh as the slimy but quite slinky Prez. His comedy was on point and he was quite the dancer as well! Another fabulous dancer was Tony Award winning actress Donna McKechnie as Mabel. Her years of dance training were sublimely evident as her crisp movements and perfect lines graced us in the song “I’ll Never Be Jealous Again.” I only wished that her dancing could have been featured in more songs!

Lead Britney Coleman as Babe gave us an earnest performance and I appreciated the thoughtful interpretations that she put in each of her featured solos, infusing personality and style into repeated choruses to add variety and flair. Second lead Tim Rogan as Sid Sorokin had a rich and strong singing voice. I wished that there had been more chemistry and connection between Coleman and Rogan, however. For example, during the song “Small Talk” when Babe abruptly tries to cook an omelet when she and Sid are finally home alone, the interactions seemed stilted and far too literal for what I thought should have been performed as a teasing and flirtatious number.

The singing on the musical numbers is well done, however, and the dancing choreographed by Parker Esse was fun and quite creative at times – think bolts of fabric and hula hoops! Individually, many of the actors give engaging performances. Those bright spots, combined with the song and dance numbers and the amazing costumes, wigs, and sets, would be enough to lead me to recommend “The Pajama Game” at Arena Stage – but Nancy Anderson’s stunningly hilarious routine at “Hernando’s Hideaway” leads me to strongly recommend that you don’t miss her performance.

Running Time: 2 hours and 40 minutes, with one intermission.