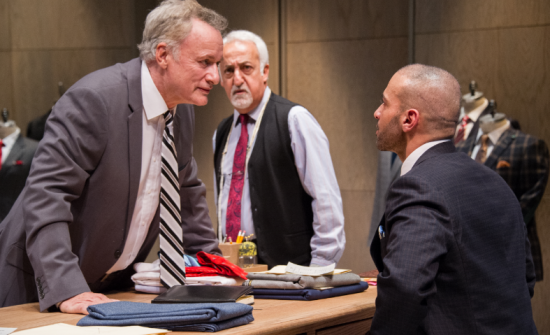 “Vicuña & The American Epilogue” is a tale of an aspiring emperor’s new clothes.

The Los Angeles premiere of this sharp satire of Donald Trump’s presidential run straddled Election Day 2016, opening two weeks before and closing two weeks after. According to playwright Jon Robin Baitz, the show first won “laughter and applause and joy and pleasure” from audiences, “and then after November 8, “a stunned and mute horror.”

That horror was the seed of the production’s new “American Epilogue.” On the night of January 20, just hours after Trump was sworn in, Baitz – who had been dining in Dupont Circle with his husband and some friends – was assaulted by a Trump supporter who shouted “Sieg Heil” and anti-Jewish slurs. The assailant did not know that Baitz had written an anti-Trump play; he just saw, in Baitz’s words, “a group of East Coast Jewish liberal homosexual sodomite communists.”

‘Vicuña & The American Epilogue’ is a tale of an aspiring emperor’s new clothes.

Baitz added such an episode to “Vicuña.” The original play itself is making its Washington premiere in this Mosaic Theater Company production, the epilogue its world premiere.

Baitz’s presidential candidate is Kurt Seaman, whose biography and ideology mirror Trump’s, though his language and demeanor are often quite different. John de Lancie (best known for his roles on “Star Trek: The Next Generation” and “Breaking Bad”) does not attempt a Trump impression and does not ape Trump’s mannerisms, which lets us assess Seaman as something more than a simplistic caricature.

The action takes place in the tony tailoring establishment run by Anselm Kassar, an Iranian Jew who has become quite wealthy by adopting an air of subservience despite his pride, and not looking too closely at the deeds of the clients he is fitting for suits. (Stage and television veteran Brian George, who originated Anselm in Los Angeles and also plays him here, is touchingly melancholic in the role.) His young apprentice Amir, a Muslim from Iran, has no such caution and is quick to challenge Seaman when the billionaire hires the two to make him an exquisite suit for the final presidential debate.

The meat of the play revolves around the debates between Seaman and Amir, and it is here that de Lancie overcomes some of the script’s weaknesses. Baitz needs his “Trump” to be many things – at times crass, malevolent, cynical, befuddled, and downright nuts. He gets laughs with some of Seaman’s Trumpier utterances, but also needs his character to be smart enough to defend himself and his ideas in complex language that Trump would never use. Is Seaman a subtle manipulator of the masses, or a rampaging buffoon who’s had a lot of luck? Baitz wants him to be both, which hampers believability, but de Lancie pulls it off.

Haaz Sleiman as Amir is somewhat less effective in these scenes, rendering his character’s fury with a loud, breathless, rushed delivery. He is much better in his quieter scenes with Laura C. Harris, who plays the candidate’s amusingly named daughter Srilanka. (Throughout, “Vicuña” offers some silly laughs like this along with the gallows humor.)

Harris’s character is not at all like her real-world counterpart, and is closer to the grasping-at-straws fantasy Ivanka Trump that some progressives created in the wake of her father’s victory. Srilanka loves her father but is appalled by his racist, authoritarian rhetoric, and is worried about his mental stability. Srilanka has the broadest emotional arc of any character in the show, and Harris captures her with success.

Regional actor Kimberly Schraf rounds out the company as a Republican senator who has first seen Seaman as a distraction, then as a dupe who could be used, and finally as a threat to both the party and the country. Schraf’s senator toes the line between Paul Ryan-like capitulation and too-little-too-late Bob Corker-like resistance. (In a play that offers up many softballs for a liberal crowd, it’s also nice that Baitz makes a stab at portraying authentic conservatism with some sympathy.)

The new, brief “Epilogue” radically shifts the tone of the play to funereal, revisiting the characters 10 years after Seaman’s election. Baitz’s own horrific experience reverberates in this tragic scene, which brings home the real message of this essential play: Perhaps even worse than Trump – or Seaman – are the American demons that have always there but that are usually chained up, now set loose on our nation.

Running Time: Two hours and 10 minutes with one intermission.