Synopsis: Based on the iconic novel by George Orwell, Sullivan’s provocative adaption is not your father’s 1984. Winston Smith, a cog in the giant machine state of Oceania, is physically and mentally under the eye of Big Brother. He is caught struggling for scraps of love and freedom in a world awash with distrust and violence. 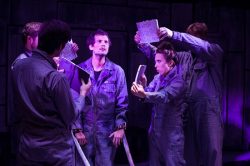 “It revels in its old-fashioned charm, its toe-tapping tunes, and its amusing campiness.” – Johanna Alonso.

Synopsis: Based on the beloved, timeless film, veterans Bob Wallace and Phil Davis have a successful song-and-dance act after World War II. With romance in mind, the two follow a duo of beautiful singing sisters en route to their Christmas show at a Vermont lodge, which just happens to be owned by Bob and Phil’s former army commander. The dazzling score features well known standards including “Blue Skies”, “I Love A Piano”, “How Deep Is the Ocean” and the perennial favorite, “White Christmas”. WHITE CHRISTMAS is an uplifting musical worthy of year-round productions. 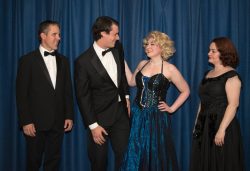 3. To Kill a Mockingbird at Laurel Mill Playhouse.

“It is amazing how this story still resonates with audiences in such a powerful way.” – Elle Marie Sullivan.

Synopsis: Scout, a young girl in a quiet southern town and her brother, Jem, are being raised by their widowed father, Atticus, and by a strongminded housekeeper, Calpurnia. Atticus, a lawyer, taken on a legal defense that stirs the emotions of the entire town. Atticus fights his legal battle with a result that is part defeat, part triumph. As Atticus comes out of the courthouse, the deeply moved town minister tells Scout, “Stand up. Your father’s passing!” 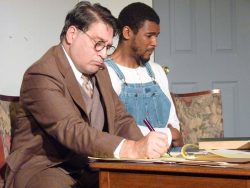 4. The Hairy Ape at Spotlighters Theatre.

“The Spotlighters Theatre’s production of ‘The Hairy Ape’ is nothing less than great theatre.” – Timoth David Copney.

Synopsis: The Hairy Ape is a 1922 expressionist play by American playwright Eugene O’Neill. It is about a brutish, unthinking laborer known as Yank, the antagonist of the play, as he searches for a sense of belonging in a world controlled by the rich. At first, Yank feels secure as he stokes the engines of an ocean liner, and is highly confident in his physical power over the ship’s engines and his men. However, when the rich daughter of an industrialist in the steel business refers to him as a “filthy beast”, Yank undergoes a crisis of identity and so starts his mental and physical deterioration. He leaves the ship and wanders into Manhattan, only to find he does not belong anywhere—neither with the socialites on Fifth Avenue, nor with the labor organizers on the waterfront. In a fight for social belonging, Yank’s mental state disintegrates into animalistic rage, and in the end he finds himself staring at the ape in Central Park Zoo. The Hairy Ape is a portrayal of the impact industrialization and social class has on the dynamic character Yank. 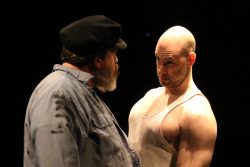 “… left me feeling pleased with the powerful performances that I had seen.” – Liz Ruth-Brinegar.
READ review.

Synopsis: It is 1971, and the iconic Weismann Theater, now a crumbling shell of its former glory, is about to be demolished to provide precious New York City parking space. Broadway impresario Dimitri Weismann arranges a reunion of the actors, singers, dancers, and personalities who peopled his famous Follies in the years between the World Wars, as a farewell tribute to the doomed building. In a shabby yet sparkling atmosphere of bittersweet nostalgia, a wide variety of faded glamour girls — the famous Follies beauties of years gone by — laugh, reminisce, brag, boast, express regret, and perform the musical numbers which made them famous, trailed by the ghostly memories of their younger selves. Against this volatile atmosphere of drunken remembrances, a decades-old love quadrangle receives a revival when Follies dancers Sally and Phyllis, and their respective husbands, Buddy and Ben — who used to hang around backstage, waiting for their girls — meet again. During one night of romance and regret, two crumbling thirty-year-long marriages are put to the test. With the endless variety of Stephen Sondheim’s score, a loving and brilliant pastiche of show music from the ‘20s, ‘30s, and ‘40s, and the time-travel trickery of James Goldman’s book, Follies is a glamorous and fascinating peek into a bygone era, and a clear-eyed look at the transformation of relationships over time. This show features the wistful torch song “Losing My Mind,” the wry showstopper “I’m Still Here,” and “Broadway Baby,” that determined ode to making it in show business. 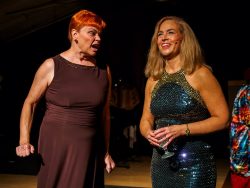