Synopsis: From the director of last year’s hit holiday musical, Mary Poppins, the sun will come out brightly during the holidays. Annie has been the gateway for millions of kids to develop a love of live theatre, with this 40th Anniversary production, a new generation gets its shot. It’s the middle of the Great Depression in New York City, and hard-knocks abound, especially for Annie and her friends at the orphanage run by Miss Hannigan. But when billionaire-celebrity Oliver Warbucks requires the presence of an orphan to soften his image, Annie unexpectedly finds a way into his heart. Along the way, Warbucks attempts to help Annie find her lost parents, prompting Miss Hannigan to concoct a scheme intended to get her hands on Annie and Warbucks’ cash. Featuring Patricia Hurley (Mary Poppins), Kevin McAllister (Ford’s Theatre’s Ragtime), Rachel Zampelli (Evita), and Wilson Jermaine Heredia (Rent – Tony Award® Winner).

“This play is what theatre is meant to be, engaging and truthful…” – Stephanie House.

Synopsis: Velvet-throated songstress Nina Simone hypnotized audiences with her signature renditions of standards from the American songbook. But on September 15, 1963, a devastating explosion in Birmingham, Alabama rocked our entire nation to the core, and from the memory of the four little girls that were lost in this unimaginable tragedy came “Four Women” — along with Simone’s other activist anthems like “Mississippi Goddam,” “Old Jim Crow” and “To Be Young, Gifted and Black.” Through storytelling and song, Nina Simone: Four Women reveals how this iconic chanteuse found her true voice — and how the “High Priestess of Soul” helped define the sound of the Civil Rights Movement. 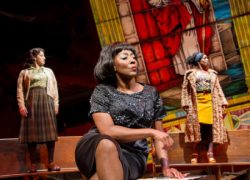 “This show is a ton of fun and a great way to get into the holiday spirit.” – Elle Marie Sullivan.

Synopsis: Do you want to build a snow man? How about watching him spring to life in front of you for one day of adventures before he melts away? In this merry wintertime romp, chock-full of chuckles and comic antics, Frosty dances into the hearts of kids and adults alike- even the heart of one near-sighted cop- through his uproarious antics. 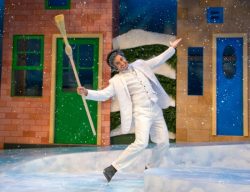 “Sexy, fun and literate, this production is a thinking man’s – and woman’s – romantic comedy.” – Lynne Menefee.

Synopsis: “Shall I compare thee to a something something… mummers play?” And so begins one of Shakespeare’s most famous sonnets, and this charming story of love, inspiration, muses, and art, based on the Oscar-winning film. This smart and poignant tale offers a smattering of allusions that will delight anyone familiar with the Bard—or simply the English language. This story is as crowd-pleasing as mistaken identities, a shipwreck, and love triumphant, and is set in a time when a Londoner could still utter the words: “Shakespeare? Never heard of him.” A great play for the entire family. 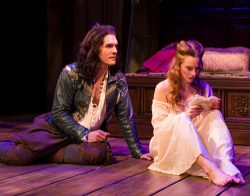 “Easily one of the finest family musicals ever written…” – Mark Beachy.

Synopsis: With equal measures of pluck and positivity, little orphan Annie charms everyone’s hearts despite a next-to-nothing start in 1930s New York City. She is determined to find the parents who abandoned her years ago on the doorstep of a New York City Orphanage that is run by the cruel, embittered Miss Hannigan. With the help of the other girls in the Orphanage, Annie escapes to the wondrous world of NYC. In adventure after fun-filled adventure, Annie foils Miss Hannigan’s evil machinations… and even befriends President Franklin Delano Roosevelt! She finds a new home and family in billionaire, Oliver Warbucks, his personal secretary, Grace Farrell, and a lovable mutt named Sandy. 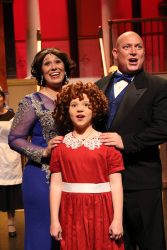