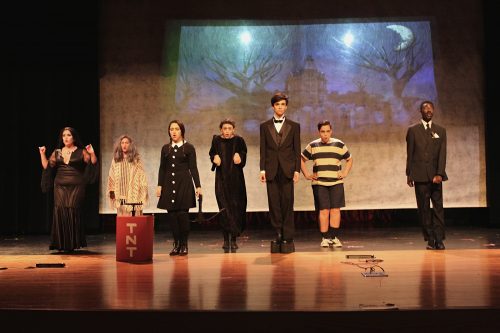 In the world of “The Addams Family,” misery is wonderful, torture is enjoyed, and death and suffering are the epitome of excitement. This modern musical, inspired by Charles Addams’ classic cartoons and written by Marshall Brickman & Rick Elice, features the original story of grownup Wednesday Addams, who has fallen in love with a sweet young man from a respectable family.

One fateful night, the gloomy family hosts a dinner for Wednesday’s “normal” boyfriend and his parents. However, the afternoon before the gathering, Wednesday confides in her father that she plans on marrying her love interest and begs him not to tell her mother. Her father must then accomplish something he has never done before ï¿½ keep a secret from his beloved wife. Deception and attempts at normalcy bring about an evening of trickery and chaos for the Addams family. Clarksburg High School’s talented cast developed this challenging show’s story with ease.

The dark nature of the Addams family seems difficult to depict, especially with the distinct personalities of each role. Wednesday Addams experiences many changes, transforming from a deadpan girl to a more lighthearted young woman. Olivia Luzquinos’s impassive portrayal of Wednesday was nicely accented with choice inflection. With this selective conveyance of tone and mood, Wednesday’s changes in character gradually became clear.

Wednesday’s father, Gomez Addams, is a demanding role. There are many humorous moments in the script, and the actor playing Gomez must possess a sense for comedic timing. With several well-timed pauses and great characterization, Saidou Sosseh brought Gomez Addams to life throughout the entire production.

Additionally, Fester Addams, brother to Gomez, is a constant source of laughter. In the second act of the musical, Fester also serves in a narrator position to draw the audience back into the story. Treshon Sherwood’s take on Fester’s dual role as comic relief and narrator was brilliantly executed, with consistent energy and a unique quirkiness that quickly and subtly gained the audience’s appreciation.

The elaborate set allowed the actors to make use of the entire stage and maintain the audience’s interest. The costumes (designed by Anne Avendt) and the props (accumulated by Samantha Pomerantz) were unique and fitting to the production. Costumes were designed and made specifically for certain characters, such as Morticia’s lovely black dress resembling that worn in the movie version. For a scene that called for a monster under a bed, the props team cleverly created large green hands and a tail that emerged suddenly to represent the creature, attracting many laughs. A decision to provide student American Sign Language interpreters (Catherine Hiles, Amaya Dennis, Adanna Kwapong, Maddison Dejewski, Christinna Le) was an incredible way to deepen the theater experience for people in the community.

Each actor played an important part in creating the complex atmosphere of the Addams household, leaving the audience impressed. The many secrets being kept by family members were revealed and resolved, and the cast concluded the show with a touching scene of each couple sharing a sweet moment before the lights faded to black.