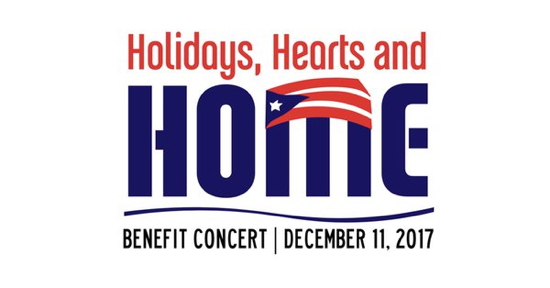 Last night’s “Holidays, Hearts, and Home Benefit Concert for Puerto Rico” was an incredible opportunity to catch some of the D.C. area’s best and brightest on the stage, along with some special guests from dance and other music genres. It was a generous undertaking by Victor Wisehart and the talented players on the stage to give of their time on their day off to raise money for Puerto Rico.

…what they can do is amazing.

The fundraiser was organized by Victor Wisehart, a cast member of “The Pajama Game” now playing at Arena Stage. As producer and director of the benefit, he said that he and the participating cast were “motivated by the incredibly generous work of José Andrés’ World Central Kitchen and #ChefsForPuertoRico to lend their time and talents to help the people of Puerto Rico following the destruction of Hurricane Maria.”

Natascia Diaz (two-time Helen Hayes Award-winner and star of Every Little Step), Britney Coleman (Babe in “The Pajama Game”) and Tim Rogan (Sid in “The Pajama Game”) opened and closed the show, as well as doing some individual numbers. The show was emceed by four-time Helen Hayes Award winner and 15-time nominee Edward Gero, who kept things moving briskly and with total aplomb. In addition to Diaz, Coleman and Rogan, the benefit featured cast members from The Pajama Game, and others, such as Kara-Tameika Watson, from the D.C.-area theater community.

The show was a combination of beloved holiday classics and musical theater songs. It was a lovely way to hear ensemble performers from “The Pajama Game” show what they can do. And what they can do is amazing.

One of the most notable segments was performed by Estela Velez de Paredez, a flamenco teacher in the Washington, D.C. and director of Furia Flamenca Dance Company. She was accompanied by her husband and flamenco educator Daniel Paredez on guitar and vocals and danced with another young flamenco dancer. Their work brought to life the joy and passion of Puerto Ricans through flamenco. The dancing was sultry, sinuous, and commanding. The audience was so rapt you could clearly hear the decisive snap of her fan. She had recently spent time in Puerto Rico and spoke movingly of the hardship and hope existing in tandem right now on the island. She brought an immediacy to the need.

The talent on that stage was amazing; for the entrance fee of a donation, one had a chance to enjoy 90 minutes of music and dance performed by the top tier of Washington, DC-area artists, all generously giving their time and whole-hearted support to help raise money to provide aid Puerto Ricans. Perhaps wider advertising might have increased the crowd, but for those that came, it was an amazing opportunity to rejoice in the richness of the local professional theatrical community in a very intimate way.

“Holidays, Hearts, and Home Benefit Concert for Puerto Rico” was only on Monday, December 11, 2017. For more information on Arena Stage, click here.