Concert Review: ‘Home for the Holidays’ with Baltimore Symphony Orchestra and Alison Buchanan 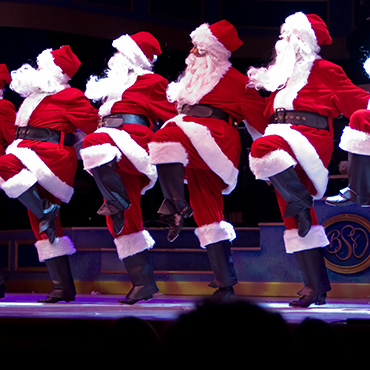 It’s a sign that the holiday season is officially underway and somewhat a tradition in my house to attend a Christmas concert with the Baltimore Symphony Orchestra (BSO). This year the concert followed a very traditional, and dare I say it predictable course with an overall somber feeling, not the uplifting Christmas spirit I have come to know from these yearly concerts.

Santa was standing by to greet concertgoers at The Joseph Meyerhoff Symphony Hall. Since 1982 the Meyerhoff as it’s known in the Mount Vernon neighborhood is a wonderful venue with great acoustics and clear sightlines for the audience.

…Baltimore has one of the greatest orchestras in the country.

This year’s concert featured, of course, the BSO who never fail to please with their skills and talent. The BSO has a notable national and international following and presence and it’s clear to see why. The orchestra struck up with “We need a little Christmas” From “Mame” and continued to perform the concert repertoire with the precision and timing you would expect from a world-renowned orchestra. Shifting from the frivolity of “Mame” to “Tchaikovsky,” the BSO brings glorious sound to the Meyerhoff.

Joining the BSO on the opening number and many to follow were The Baltimore School for the Arts Chorus.  This group of young people is an absolute joy to listen to with impeccable timing and intonation their presence truly bringing uplifting moments to the concert.

Soprano Alison Buchanan featured several times throughout the program with “I wonder as I wander,” “Christmas Spiritual Medley,” “This Little Light of Mine,” and “Oh Holy Night.” Her performance felt very safe as she performed traditional Christmas songs. I think this diva had more to give, but we didn’t get to experience it. While she brings a dramatic stage presence and a strong voice with clarity, her style seemed to have little variety through the songs she performed. Billed as a versatile soprano, perhaps it was the song choice that stymied her performance. At times Buchanan couldn’t be heard over the strong young voices of the choir, but overall her performance was a crowd-pleaser.

Also Joining the orchestra on stage were The Baltimore School for the Arts Dancers bringing life and a real sense of Christmas fun to the stage with their Tapping Santa’s! A chorus line befitting a Broadway show complete in Santa costumes, beards and padded out bellies. Kudos to these performers for tapping their way into a great finale heading into intermission.

Thomas Wilkins conducted the BSO and kept the show flowing seamlessly with humor and connected exceptionally well with the audience. Wilkins is Music Director of the Omaha Symphony and also the principal conductor of the Hollywood Bowl Orchestra. It is no surprise that his music career has spanned over decades and that he has led some of the greatest orchestras in the country, including the New York Philharmonic and the National Symphony in Washington DC.

Baltimore has nothing to prove when it comes to justifying crime rates or youth behavior that may be inflated in the national press. In my opinion, the “Home for the Holidays” show shouldn’t be a place to highlight socio-economic issues, good or bad. Like many cities throughout America, charm city faces its challenges. Therefore, I question the comment made by the conductor that the talented singers in the choir would not be young people we have to worry about entering the justice system! It came with several groans from the audience members sitting around me. I thought it out of place and inappropriate considering most of the audience embrace the chance to celebrate and enjoy music- leaving politics and their daily struggles outside the theatre, if only for a few hours. Call me old-fashioned but I like to keep my politics and music separate.

Overall an enjoyable show and a joy to hear, casting no doubt that Baltimore has one of the greatest orchestras in the country.

Runnig Time: 1 hour and 45 minutes with one intermission.

“Home for the Holidays” ran from December 16- 17, 2017 at Meyerhoff. Check out the BSO’s website here for upcoming shows and performances