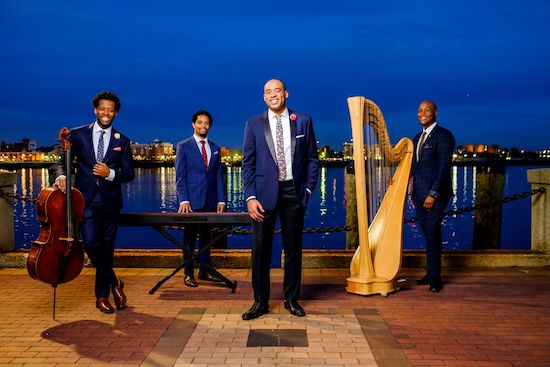 Sons of Serendip is a musical group of four young African-American men who met in graduate school at Boston University. Micah Christian is the lead vocalist; Cordaro Rodriguez plays piano and guitar; Kendall Ramseur handles the cello and vocals, and Mason Morton is the harpist. In 2014, they met and began to create music, culminating as the fourth runners-up on season 9 of America’s Got Talent. In addition to the other instruments, the group also uses a foot drum when the music calls for it. Several other professions, including law and teaching, lost some talent, but the music world gained an incredible quartet.

The instruments and the vocals gave a sort of call-and-response that was mesmerizing.

In keeping with the season, the program at AMP was mainly holiday music from their CD, “Christmas: Beyond the Lights.” These selections were pleasant and crowd-pleasing. However, these four gentlemen are serious musicians. During the set, they performed a couple of instrumental solos, where the only vocals were humming. These were strong, haunting and provocative and the wordless vocals were so interwoven with the actual instruments that they became de facto instruments. The instruments and the vocals gave a sort of call-and-response that was mesmerizing.

Sons of Serendip is a classical crossover quartet that blends R&B, soul and classical music. The New York Times has described the group as “silky beyond reason.” The songs are delivered smoothly, albeit with a bit too much echo effect at times, which seemed more suited to either Las Vegas or a much larger venue.

Maryland based singer-songwriter Summer Pearson opened the show, along with her pianist and a backup singer. It was a very cheerful, if short (roughly four songs), performance with several exhortations to receive all God’s light and goodness and to be strong and keep on keeping on. However, on her final song, “Ave Maria,” magic happened. Summer has an operatic voice and the range and power of the “Ave Maria” showed off her magnificent voice in full power.

The venue is a charming cabaret-style room in the new Pike & Rose development in North Bethesda. However, the stage seemed a bit cramped with four tall men with instruments. The pacing of the show was a bit slow with a nearly 20-minute intermission, and at one point there was a missing cable for one of the instruments.

The crowd was wowed by the Sons of Serendip, who have performed at AMP before. During the show, patrons were invited to place balls on a Christmas tree in memory of loved ones lost or not there, led by Micah Christian. What could have seemed corny in other circumstances, appeared touching and many people quietly stepped up and placed balls on the tree.

Running Time: The show ran over 2 hours with a 20-minute intermission.