Concert Review: ‘The Bohemian Caverns Jazz Orchestra’ at the Mansion at Strathmore 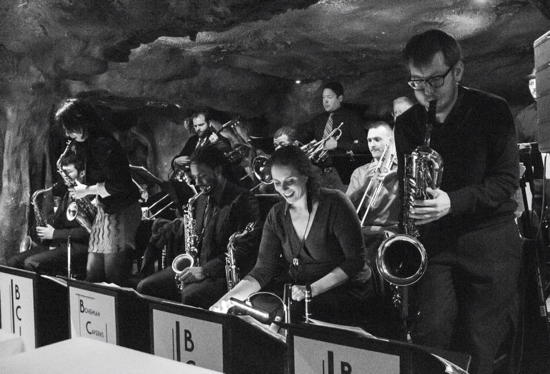 Founded in 2010 at the famous jazz club for which they are named, the Bohemian Caverns Jazz Orchestra (BCJO) is the premier big band in the Washington DC area. Unfortunately, Bohemian Caverns closed in March 2016 but the orchestra has continued to play various venues in the area. At the Mansion at Strathmore, they gave their classic holiday concert titled “Bohemian Christmas.”

…seeing the Bohemian Caverns Jazz Orchestra was a real treat.

BCJO is a fine example of an ensemble. The musicians have wonderful chemistry and are able to play in sync beautifully.

Brad Linde leads the band and also hosts the concert. His dry sense of humor and playfully mischievous nature make him very engaging and entertaining.

Many of the band members switched between several instruments throughout the night, including those one doesn’t always see in jazz music such as a piccolo and violin.

The concert consisted of typical holiday tunes such as “Sleigh Ride,” “Jingle Bells,” and a gorgeously emotional arrangement of “I’ll be Home for Christmas.” Dan Roberts, the pianist for the group arranged “Ave Maria” and “Bring a Torch Jeanette Isabella.” Both arrangements took these classic holiday pieces and gave them a beautiful jazzy edge. The band also did a challenge, which was to play “Silent Night” in 90 seconds without the rhythm section. They did it in exactly 90 seconds and that was a testament of how incredibly talented these musicians are.

The highlight of the evening was the performance of Duke Ellington and Billy Strayhorn’s arrangement of “The Nutcracker Suite.” This complex and long piece of music is a marvelous example of how Ellington and Strayhorn could take classical music and make it their own. It is diverse, going from loud and robust to delicate and dainty. The orchestra performed it well and every player was featured in some way.

They are a talented group of artists and we are lucky to still have them around after Bohemian Caverns closed. The Mansion at Strathmore is a beautiful venue this time of year to catch any concert, but seeing the Bohemian Caverns Jazz Orchestra was a real treat.