Concert Review: ‘The Holiday Show’ by the Gay Men’s Chorus of Washington, DC at Lincoln Theatre 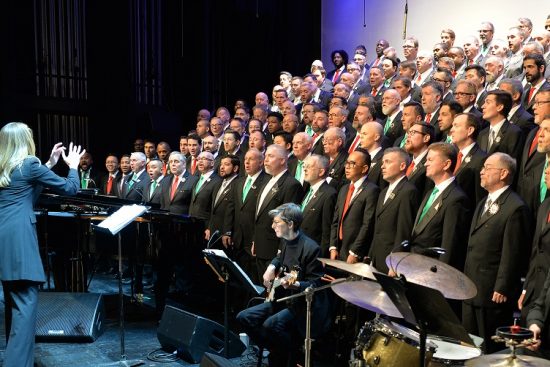 An elf in holiday briefs struts across the stage carrying a sign that reads “One year later…” Where else could we be except at the Gay Men’s Chorus of Washington, DC’s annual December concert? Entitled this year as simply “The Holiday Show,” I had the great pleasure to be at Lincoln Theatre on Opening Night, December 9, 2017.

If you were at last year’s “Naughty & Nice” show, you’ll instantly get the inside joke that opens the show. But if for some reason you missed out last year or if you’ve never seen the GMCW in concert before, I have great confidence that once you’ve seen “The Holiday Show” you’ll spend every December from now on counting down the days not ’til Christmas but ’til the annual concert.

The over-two-hundred-voice choir opened the show with a rousing performance of “Gloria Fanfare” by Jeffrey L. Ames that perfectly showed off their technical finesse of immaculate vowels, luscious harmonies, and impeccable vocal balance. I especially loved hearing the tenors float on their melodies above the ostinato. Although the Chorus may bedazzle you at times with their campy costumes and spectacular dance moves, the first piece on the program is a bold proclamation of the choir’s exquisite musicianship (which is flawless on even the silliest of song and dance numbers, although you might be too enchanted with the dancers to notice).

I was surprised after the first piece when we were gifted with a deeply touching testimony from a choir member about a childhood Christmas tradition and I realized that unlike last year’s saucy show, this year’s program would touch much closer to our hearts. The personal narratives continued throughout the show as interludes between songs and they were always poignantly vulnerable revelations that received warm applause from the audience and maybe made us sniff a little bit, too, in the best of ways.

GMCW and their ensemble 17th Street Dance delighted me with their fully costumed rendition of “Nutcracker Jingles” which was a mini performance of the Nutcracker ballet and let me say, the ballerinas had some fine technique! From the dancing snowflakes to the Cossack dance to a Sugar Plum pas de deux (with a lift!) to the waltz of the flowers, I was loving every second. Can I pitch for 17th Street Dance to put on a full-length ballet next season?

The Chorus swept me away with their stellar vocal technique on several traditional carols over the course of the program, showing off the masterful direction of Dr. Thea Kano who brings out rich perfection from the choir and makes it appear effortless. I appreciated that we heard about diverse December holidays in not just the Spanish Hanukkah song “Ocho Kandelikas” but also in stories from choir members who were Muslim and Jewish.

Principal Accompanist Theodore Guerrant – who has played for 35 years with GMCW! – shone throughout the evening but I especially got to enjoy his talents on the gorgeous ethereal piano part to the song “All Is Calm” performed by Rock Creek Singers. Guerrant was adeptly joined on many songs by Adam Ashforth on drums and Mary Scott on bass. I also loved hearing guitarist Yoshiyuki Nishio who provided the classical Spanish guitar accompaniment to “Ocho Kandelikas” and cellist Tommie Adams, Jr. who performed on the haunting song “One Light.”

One of the standout performances of the night was by small ensemble Seasons of Love on their rendition of “First Noel/It Is Well.” Their gospel-inspired passion was contagious and they received the well-deserved most enthusiastic applause of the evening. One small suggestion I would make for the group is to encourage some of the members to sing out more boldly. The notes and heart were there one hundred percent and I would love to see the vocals carry as much through the audience as the emotions did.

A cappella ensemble Potomac Fever was also excellent with their sophisticated and unexpected rhythms on “Carol of the Bells” and “God Rest Ye Merry Gentlemen.” One of my favorite parts of the evening was hearing the GenOUT Chorus which is made up of LGBTQ+ youth and teenaged allies. They had beautiful tone and I especially loved how free and easy the sopranos’ high notes were. I would encourage them to be even more outrageously campy with their dance moves on “Shoulda Been A North Pole Elf” – don’t hold back!

We were of course treated to another year’s rendition of the precisely choreographed song “Favorite One” and I loved that the chorus put a twist on it this year to keep it fresh, as they also did with last year’s crowd-pleasing tap dance to “Sleigh Ride.” It’s a much appreciated touch that the chorus challenges themselves to tweak the annual attendees’ favorites.

I highly recommend “The Holiday Show” by the Gay Men’s Chorus of Washington, DC as a not-to-be-missed show this December. In the, let’s face it, turbulent year that it has been in our nation, the choir’s choice to use this year’s concert to share so many personal stories of growing up gay amongst a multitude of faith traditions and cultural backgrounds gave us some much needed sweetness and connection this holiday season. There’s still plenty of silliness (which satisfies my silly soul) but there’s also strength and hope and love in the songs and messages shared which nourished my heart – and I’m confident that it will nourish yours, too.

Running Time: Approximately two and half hours, with one intermission.

Advisory: The majority of the show is perfectly appropriate for children. A scantily clad elf in nothing but holiday briefs does cross the stage at the very beginning of the show if you feel the need to cover the kiddies’ eyes. The male ballerinas also wear tights which is not inappropriate for kids but will probably cause some giggles in small children if it’s their first time seeing ballet.

“The Holiday Show” by the Gay Men’s Chorus of Washington, DC at Lincoln Theatre runs through Dec. 17, 2017. ASL interpreting at some shows. For more information, click here.