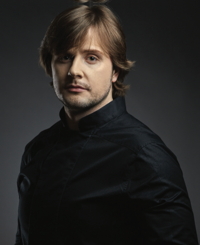 Vocal Arts DC’s Dec. 5 offering at the Kennedy Center’s Terrace Theater featured Andrei Bondarenko, a Ukrainian baritone, and Gary Matthewman, a British pianist, performing a program exclusively in French and Russian, featuring music that ranged from songs about Don Quixote to the works of Tchaikovsky. Even though parts of the program were difficult to follow (a good portion of the text was in Cyrillic), Bondarenko’s enthusiasm and Matthewman’s capable accompaniment more than adequately made up for it.

In “The Virgin in the City,” a piece by Sviridov, the escalation of emotion transformed a sad and beautiful song into something truly lovely.

It soon became irrelevant whether or not one could follow along, because simply watching his performance was utterly fascinating.

Some operatic performances seem to falter because the singers focus more on the singing than the action — especially in a concert, where it’s a formalized program of songs that do not necessarily tell a story. But as the concert continued, it became evident that Bondarenko pulls no punches in pursuit of his art–in a drinking song, he began to sway, his face taking on the happy gleam of the well-lubricated. In another song, the surge of feeling was such that he only seemed to come back to himself when the music stopped–as if he had been transported somewhere else for the duration of the song. It soon became irrelevant whether or not one could follow along, because simply watching his performance was utterly fascinating. As for his accompaniment, Matthewman never missed a step, his fingers running across the keys of the Steinway grand piano with grace and seeming effortlessness.

And it seemed the rest of the audience agreed. Matthewman and Bondarenko were called back for not one but TWO encores, the second after they returned to the stage wearing shy grins, agreeing in silence to perform yet another song after the applause failed to cease. After the second encore, the two artists received a standing ovation from some audience members–the true acknowledgment of a job well done, and well-earned in the case of these consummate performers.