Opera Review: ‘The Little Prince’ at The Kennedy Center 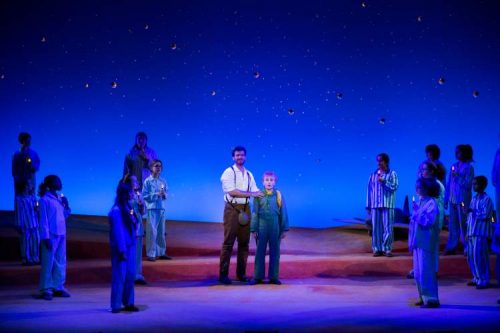 At this time of year, as the days end earlier and the nights get darker, it’s easy for the world around us to seem a little more strange than usual. After all, it’s the time of year when a man in a red suit reportedly rides in a sleigh pulled by reindeer, to deliver presents made by elves and eat milk and cookies in various homes. The Washington National Opera’s holiday opera is not, perhaps, as deeply imbued with that particular holiday spirit as, say, Santa Claus, but “The Little Prince” is full of hope, beauty — and, most importantly, imagination.

Antoine de Saint-Exupery’s fascinating, illustrated tale of the stranded pilot and the small boy he meets in the desert is brought to glorious, illuminated life in this Kennedy Center production, directed by Francesca Zambello, the WNO’s artistic director, and written by Rachel Portman and Nicholas Wright. From the very first moment, the production takes the audience to another world–one in which a hat is actually an elephant inside a boa constrictor, a box is actually a sheep, and baobabs are a sinister presence in the life of a little prince.

The story begins with the Pilot (Michael Adams) describing his childhood artistic frustrations–namely, that he had drawn an elephant eaten by a boa constrictor, which was mistaken by grown-ups for a hat. Setting his artistic ambitions aside, he learns to fly–and his plane crashes in the desert, where he meets The Little Prince (Holden Browne) a boy with a yellow scarf who asks him to draw a sheep. The Prince is the sole caretaker of a small planet, with three volcanoes and a single Rose (Madison Leonard) that he lovingly tends, until she tells him to go off in search of wisdom. His journey takes him to many strange worlds, until he eventually lands on Earth, where he discovers that there are many other Roses (Allegra de Vita, Raquel Gonzalez) in the world, tames a Fox (also de Vita), and eventually succumbs to the seductive promises of a Snake (Arnold Livingston Geis).

Antoine de Saint-Exupery’s fascinating, illustrated tale of the stranded pilot and the small boy he meets in the desert is brought to glorious, illuminated life in this Kennedy Center production.

“The Little Prince” is a wonderfully imaginative opera, with its cast of strange and colorful characters. A few images in particular jump out–the Pilot on his prop plane, shrouded in mist, surrounded by pajama-clad children. Those same children, taking the Prince on a journey with large origami cranes mounted on poles. Sometimes the aesthetic feels almost like a Roald Dahl novel, particularly the emergence of the sinister baobab trees that plague the Little Prince’s tiny planet, wiggling their spiky fingers at the edges of the stage. At other times, it’s strangely peaceful, the voices of the Washington National Opera’s Children’s Chorus clear and angelic.

The principal cast dives into their roles with enthusiasm and flair, making the Prince’s journey all the more strange and interesting. Leonard’s Rose is flirty and rather vain, drawing her shiny petals around herself as she tosses her movie-starlet curls. By contrast, Browne’s Prince is rather earnest, and the young actor carries himself with a combination of poise and playfulness, reacting to the bizarre events of the story with a strong sense of the whimsical. He is the very portrait of Saint-Exupery’s “petit prince,” with his spiky blond hair, blue-green suit and yellow scarf.

Adams’ strong baritone leads the narrative, and he watches from afar as the Prince encounters both everyday and unusual creatures–a Vain Man (Livingston Geis) who plays the kazoo and insists on applause (which he got from the audience), an alcoholic who rolls around the stage in a barrel (Alexander McKissick), a King who has no one to rule (Timothy J. Bruno) and a Lamplighter for whom days last just one minute (also McKissick). His grief and bewilderment as the Prince vanishes (with only his scarf remaining) are gripping.

In some ways, “The Little Prince” is a bizarre tale, but it stretches the limits of the imagination and this particular production is inexpressibly lovely, strange, and funny. The title character dismisses those obsessed with the ordinary problems of the world (calling them mushrooms), determined to learn for himself what’s most important. And at the end, he discovers it was at home all along–a good lesson for a holiday opera, as people gather closer in the winter cold.

Running Time: Approximately 2 hours, with an one 20-minute intermission.

“The Little Prince” is playing at the Kennedy Center’s Terrace Theater through Dec. 17, 2017. For more information, click here.