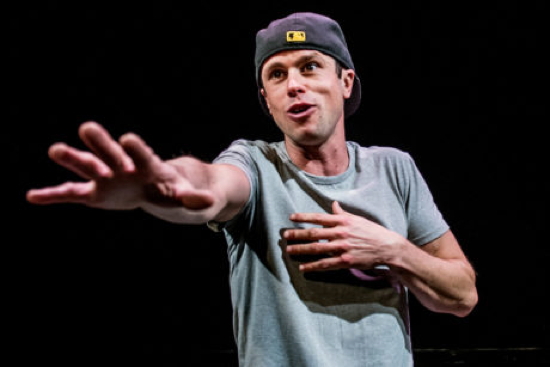 Dan Hoyle in The Real Americans. Photo by Teresa Castracane.

Early in President Obama’s administration, Dan Hoyle left his urban liberal bubble of San Francisco to travel Small Town America and meet the “real Americans.” He wanted to understand this part of America better and brought back their stories to the urban centers to stimulate conversations. Hoyle partnered with Charlie Varon to develop the piece. Hoyle performs and Varon directs.

He [Hoyle] is an entertaining performer… Each character had a very distinct physical and vocal characteristic.

The story is somewhat juxtaposed. Hoyle introduces the audience to his group of friends in San Francisco who seem to perpetually be out to brunch. Then he switches to one of the individuals, or families, that he meets on his trip. This switching back and forth makes for an interesting comparison and contrast analysis of America.

Hoyle has a clear writing style that cuts the point of a conversation easily without losing the nuances of a discussion. Most of it was hyperbolic or appeared to be, but this made for an effective storytelling technique. The more ridiculous a character seemed, the more the audience is able to recognize the differences and similarities.

He is an entertaining performer as well. Each character had a very distinct physical and vocal characteristic. Hoyle has mastered the various dialects and idiosyncratic vocal patterns found across the country. He is also able to switch characters quickly, which makes for some entertaining group discussions on stage.

E-Hui Woo designed the lights and set. The lights were clever and made the various locations and time of day clear to the audience. The set was simple, consisting of a chair, a table, and a hat rack, which held Hoyle’s various costume additions for the characters. It was easy to see this set become the places that Hoyle traveled to, including brunch in San Francisco.

David Hines designed the sound with additional music by Mars Today. The music was representative of genres that aren’t often heard in coastal urban centers but that are quite popular is smaller towns throughout the South, Appalachia, and the Midwest.

Hoyle was not afraid to call out the audience as being a part of the liberal elite. He recognizes his position of privilege and is using the platform to promote conversations. America is made up of latte liberals, rednecks, and everything in between. All of them are the real Americans.