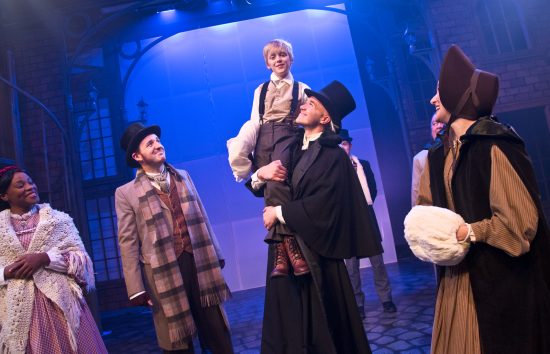 This season the Annapolis Shakespeare Company (ASC) captures the holiday spirit with its inspiring and heartwarming production of Charles Dickens’ “A Christmas Carol.” The world premiere adaptation by Sally Boyett and Donald Hicken (who also directs) brings the classic tale of Ebenezer Scrooge to life with superb performances and stunning visuals that transport you to Victorian-era London.

“A Christmas Carol” by the Annapolis Shakespeare Company is fantastic and the perfect present for the entire family.

Every day is one big Bah Humbug for old miser Scrooge. Brian Keith MacDonald does a phenomenal job portraying the penny-pinching, grumbling businessman, whose mean spirit at times can be funny such as when he shoos away a young caroler early on. However, as life and death unfold before him, MacDonald’s Scrooge is equally endearing as his hardened heart eventually softens, when he comes into his own transformation.

Those who haunt Scrooge are also intriguing to watch. What stands out about ASC’s “A Christmas Carol” is how it seamlessly transitions from dark to light throughout the production. The first eerie encounter sees Scrooge’s old partner Marley, played by a convincing Dexter Hamlett, show up full of sorrow and shackled in heavy chains wearing him down. You can feel the extent of his anguish as he warns Scrooge to avoid a similar fate. In contrast, the angelic Ghost of Christmas Past, portrayed by Bethany Mayo radiates innocence as she takes Scrooge back to the simpler, happier times of his youth. Bold and brash, Craig Allen is entertaining as the Ghost of Christmas Present, while Jack Russ as the Ghost of Christmas Yet to Come is frightening without even saying a word. Finally, Bill Dennison exudes goodness as Scrooge’s dutiful employee and Tiny Tim’s doting father, Bob Cratchit.

“A Christmas Carol” comes together with thoughtful attention to detail by Lighting Designer Adam Mendelson and Projections Designer Joshua McKerrow that changes from snowy surroundings to a 19th-century office and a grim graveyard, among other eye-catching backdrops. Meanwhile, all of the choices by Costume Designer Sandra Spence add authenticity from the gentlemen’s top hats to the ladies’ bonnets, to the flowing white dress of the Ghost of Christmas Past, down to Scrooge’s nightcap. Spirited dance scenes by the ensemble mixed in with traditional English songs such as ‘I Saw Three Ships’ and ‘Here We Come A-wassailing’ make for much merriment.

“A Christmas Carol” by the Annapolis Shakespeare Company is fantastic and the perfect present for the entire family.