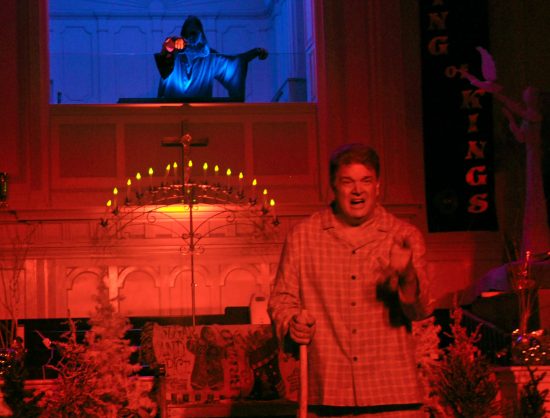 Given the plethora of productions this time of year, it’s a struggle to make Charles Dickens’ classic story your own.  The characters of Scrooge, Marley, Cratchit et al. are practically in our DNA, and visions of some faraway Victorian London and people using thick-as-molasses British accents fill our heads.

So it’s easy to forget that Dickens was the son of a man in and out of debtor’s prison, no stranger to the workhouses Scrooge disparages, or that poverty and infant mortality were the rule in Merrie Olde England, not the exception.  Perhaps, to make Dickens’ message live in our hearts, we need to think of the Scrooges and Cratchits of our own time, how their lives might play out in America today.

… be prepared for many plot twists and surprises; the women and children are far more prominent in Leary’s telling, and this makes for an evening in which Dickens’ actual story fades and our own story comes to the fore.

Adaptor and Director William Leary has set himself a considerable task by updating the old tale, and with his latest version, “A Christmas Carol 2017,” he confronts us with issues so familiar they make you squirm.  Which would be the point, actually; because it’s all too easy to treat Dickens’ old story as a nostalgic feel-good story and walk away unscathed.

Maybe it’s time for a Cratchit family that has to choose between medication for their youngest son, Tim, and a roof over their heads, and a Scrooge who not only has no time for charity, he deliberately shuts down a foundation chasing after yet another business opportunity.  And a Belle who doesn’t just disappear after she leaves Scrooge, but who actually lives the ideals she once saw in young Ebenezer.

Leary deliberately stages his story in a church – this year, the First Baptist Church of Hyattsville – and incorporates the location routinely into the narrative.  With the aid of Technical Director Stephen Beitzell, Leary also creates projections high up above the action, to illustrate the emotions of the many songs woven into the story.  Appropriately, the visions projected onto the sanctuary ceiling vary from nativity scenes and charming northern lights to our homeless neighbors and our service personnel out on tour.

Dickens’ story is more or less secular in the telling, with ghosts but no priests to be seen; Leary immediately turns the tables by giving us Pastor Charlotte (in a strong performance by Susan L. Smithers), who does not shy away in the least from the doubters, and the intense theological arguments that are common today.  Ebenezer Scrooge is played here by the blustery, (mostly) unapologetic Tim Jansen, who dominates the stage with his all-too-familiar advocacy for profit.

The church which is the setting for “A Christmas Carol 2017,” like so many today, also houses the homeless—indeed the action begins around a barrel-fire surrounded by young and old, bracing themselves against the cold.  Wolf Pack Theatre’s inclusiveness and focus on community is reflected in a diverse cast, from the charming young Maria Stephanos to real-life to the real-life pastor of First Baptist itself, Stephen Price, as a homeless man.

There are a number of wonderful musical turns here; in yet another twist on the old tale the ghosts of Christmas Past and Present are Scrooge’s mother and father, and Elizabeth A. Weiss and Michael Reeher, and each have star turns here (Weiss with “Amazing Grace” and Reeher with a wonderful “O Holy Night”).   For my money, though, the show stops for Kaitylin Elizabeth Gebhardt, as Young Tim (here, a child struggling with cancer).  Her rendering of “In the Bleak Midwinter” is strong and passionate.

If you can make it to the First Baptist Church of Hyattsville, be prepared for many plot twists and surprises; the women and children are far more prominent in Leary’s telling, and this makes for an evening in which Dickens’ actual story fades and our own story comes to the fore.

One last note:  this is the time of year when our thoughts really should go towards those whom society has been forgotten.  Wolf Pack Theatre is co-produced by Community Crisis Services, Inc., which provides tens of thousands of beds and meals for those most in need.  So don’t come to this show to leave our troubles behind; come to re-engage with the unfinished business of our hungry, our lonely and homeless.

Running Time: Two hours and 45 minutes, with a 15-minute intermission.

“A Christmas Carol” plays through Sunday, December 17, 2017, at Wolf Pack Theatre Company performing at the First Baptist Church of Hyattsville, MD – 5701 42nd Avenue, in Hyattsville, MD. Buy tickets at the door or purchase them online.