Theatre Review: ‘Beauty and the Beast’ at The British Players 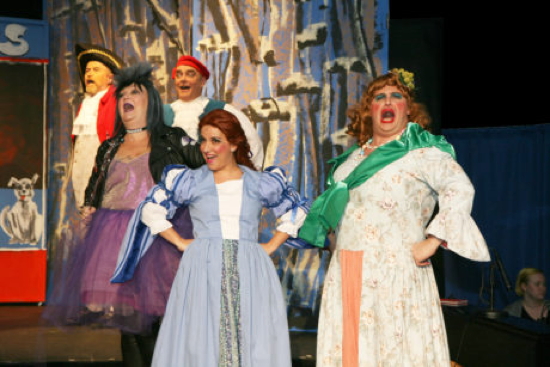 Michelle Hessel and Ian Grossman, as the sisters in ‘Beauty and the Beast,’ foreground. Photo by Simmons Design.

Leave it to the British Players to give us a holiday treat that is heartfelt, uproarious, artistically pleasing and–gets all of ye people in the seats in the act, mate! The Christmas season is all about tradition, and when the chill is in the air and festive plans are being made, one’s memories go back Victorian times, of Dickens and roasted goose and jaunty singalongs around the piano.

Said show would be its panto production of “Beauty and the Beast,” a surprisingly effective and intricate offering in the grand tradition of this genre.

Pantomime, or simply panto, is a truly unique form of entertainment is simple in its ingenuity and ingenious is its simplicity. Essentially a stage production designed for family entertainment, it is usually performed during the Christmas and New Year season. Modern pantomime includes aspects of music hall staples–songs, gags, slapstick comedy and dancing, as a nice touch, has usually a few leading characters as men playing women and women playing men, with the male crossdresser in a key comedic role.

…a surprisingly effective and intricate offering in the grand tradition of this genre.

All tongue in cheek, it combines topical humor with a story loosely based on a well-known fairy tale or fable. Best of all, it is a little bit of “Rocky Horror,” for our adult readers, being a participatory form of theatre, as the audience is expected to sing along with certain parts of the music and shout out retorts to the performers, who are lobbing up softballs, begging for attention. No passive afternoon here. On my matinee, scads of children were at the foot of the stage, watching and engaging in the event above them. And with the winning selection of “Beauty and the Beast,” which I was skeptical about, they were enthralled.

Was it actually a great way than this to introduce the wonder of theatre in the lives and hearts of children? The interactive nature of panto breathes life into that interaction by making theatergoers active participants in the zaniness and contortions, whether through booing a villain, shouting directions, or joining in song. Admittedly guarded at the prospect of pulling off a panto as complex as “Beauty and the Beast,” I was surprised at the vocal quality and sharpness of the production.

At the outset, we learn of dueling witches, who place a bet on the future of the Beast, imprisoned by his own selfishness.  Emily Alvarado, does a pleasing and delightful turn as  the fairy, Goody Two Shoes, adorned all in white and adding a fine upper vocal line in several numbers, especially with her adversary, Missi Tessier, in a punk wig and big bad boots, causes a stir every time onstage is hilarious and commanding as bad Fairy Bovver Boots. Bigger than life, she commands the stage and is especially effective playing to the audience. Later we meet the Bottom family.  Did you know that the iconic Belle, the beauty in the show, had an almost identical twin named Smelle? Put both first and last names together and don’t throw a tomato at me.

In the gender-crossing role, Ian Grossman gives an all-in effort playing sister Smelle, and with linebacker shoulders and a decolletage that he is constantly pulling items from, he does great work, at one point, not getting enough feedback from the audience, intones “OK, you do know how this is supposed to work, right?”

Allan Brown and his sonorous tones plays the role of Claude, the father of Belle and Smelle. And as Belle, the woman who looks beyond appearance, Michelle Hessel graces us with a tender portrayal of the beauty who falls in love with the Beast/Prince Trueheart. Played by Josh Beede, his portrayal of the beast, even in costume, elicited tender pathos.  His mannerisms as the Beast and later as the Prince was very believable… The romantic dance between Belle and the beast, when love is finally revealed, was poignant and his vocals in the upper range were impressive.

The cast hummed along nicely together, full of the simple fun of the set, replete with garish colors that make one sit up.  Kudo to the set design, by Mike Lewis and George Lucas, and the whimsical colors in the costume design by Nicola Hoag.

Though some of the laughs are groaners and the relationship jokes are repeated endlessly, the obvious fun of panto is outright fun and laughter. An added aspect is turning to popular songs to convey a meaning between characters, giving us new perspective on “Pretty Woman (an expressive performance by bad boy Joe Lilek as Carlos), “Put On A Happy Face,” “Get Me To The Church On Time,” and “Where Is Love?”

Director Robert Leembruggen and The British Players have given us a show that brings us all together, just as the people in a village would gather for the annual show.

Running Time: 2 hours and 20 minutes with an intermission.