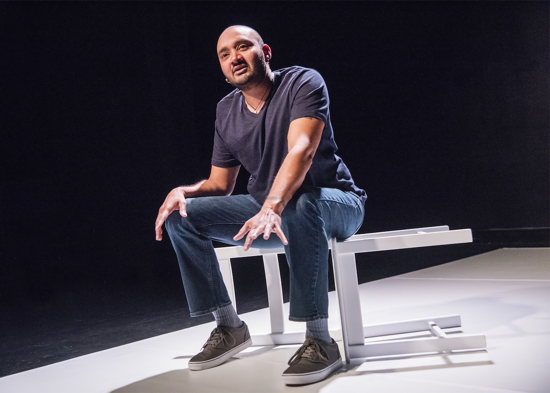 It is an unfortunate fact that the stories of transgender individuals are often told by cisgender playwrights. “Draw the Circle,” written and performed by Mushuq Mushtaq Deen follows Deen’s transition through the eyes of those closest to him. The audience gets to meet his conservative Indian Muslim parents, his friends from high school, and his long-term partner, among doctors and others. It is a unique look into a life and development from a perspective outside of the individual.

Deen conveys his writing with clear distinction and emotion.

Deen writes with clarity and precision about the topic. His characters are all realistic and have clear intentions and feelings. The journey that they all go on with Deen is compelling and full of fear and love. The powerful ending is a reminder to everyone just how important these conversations are.

Having the opportunity to perform one’s own words is a blessing. Deen conveys his writing with clear distinction and emotion. He is able to give each new character a specific physicality and vocal quality. There are projections that introduce the audience to the characters by name, and occasionally giving a small supporting detail, but after a while, the audience becomes familiar with the characters because Deen’s acting to so well defined.

Chay Yew directed this piece with a simple yet direct technique. The only set piece was a white chair which was moved about the stage by various characters and at times symbolized Deen, as the audience never had the chance to meet him directly.

The designers worked with this piece giving it a visual simplicity that was smart and compelling. The lighting designers Mary Louise Geiger and E-hui Woo created the various worlds and settings throughout the small stage by affecting the light. The sound design by Matthew M. Nielson was subtle and pleasant.

This piece is significant and timely. At the end of the show, the audience is reminded of the transgender individuals who have been murdered this year alone. It is an overwhelming reminder of what is happening in our country.