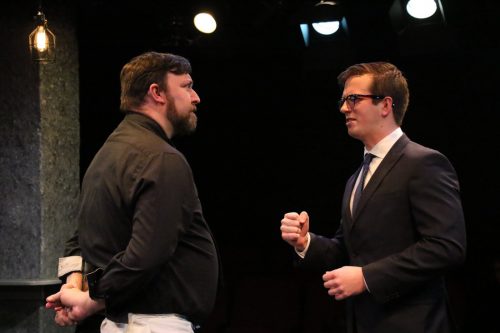 When “First Date” premiered on Broadway in 2013, it was panned more than praised.  Which just goes to show you that critics don’t know everything. They can sink a decent show with a lousy review.  Fear not, intrepid theatregoers.  Spotlighters Theatre has once again proven why it’s been near the top of the heap of local theatres for more than five decades with the lovely little production of “First Date,” with a book by Austin Winsberg and music and lyrics by Alan Zachary and Michael Weine.  A first-rate theatre with a top-notch director, cast and crew can make even mediocre material totally enjoyable and absolutely worth seeing. Even when I didn’t love it, it still made me giggle or at least smile.

The obligatory plot summation is quite brief, as is the ‘plot’ itself.  I use the term ‘plot’ very loosely.  This one makes Hallmark movies look weighty.  Aaron is a nebbish nerd, working in corporate finance, who’s never been on a blind date. Casey is an aspiring photographer and confessed serial dater attracted to bad boys (which Aaron decidedly is not).  They meet for a drink which extends into a meal.  During the date, each is visited – mostly in songs – by imaginings of what their friends and families would tell them to do or not do.  They make some discoveries about themselves and each other along the way – and that’s pretty much the long and short of it.

Director Fuzz Roark has guided this frothy romp with a well-planned vision that translates well onto the postage-stamp-sized stage at Spotlighters.  Nicely cast and well-teched by his team of backstage creatives, Roark shows how well he knows how to put together a production that is quick, clean (except for a few f-bombs), and full of fun.

Musical Director Michael Tan’s pit band is a little too loud in some places but plays the upbeat score with panache under his baton.  Tan has also done his usual excellent job of coaching the best possible vocals from the cast, who blend well on the production numbers.  Choreographer Emily Frank has some clever moves that fit the music and personalities well. Alan Zemla’s set and scene decorations are placed strategically to maximize the small space and as usual are well-executed.  Al Ramer is fast becoming one of my favorite lighting designers and he doesn’t disappoint here.  Fuzz Roark and company supplied the appropriate costumes which added a pleasant pop to the evening.

The ensemble of supporting actors is all very talented and adept at playing multiple roles.  They handle the dance numbers well for the most part and all have great stage presence.  On opening night, the first big number, “The One” had a couple of rough spots but they then settled into a good, cohesive unit for the rest of the night and added tremendously to the action.

Adam Abruzzo is terrific as Gabe, Aaron’s best friend, and dating guru.  He also has a high ol’ time as the stoner Casey once dated.  Alyssa Bell as Lauren, Casey’s sister, is full of well-intentioned advice that she delivers well.  With a lovely singing voice and some smooth dance moves, she is a welcome addition to the evening.  I had trouble hearing her in the number, “The Girl For You,” but that may have been due to my proximity to the band.  The rest of the audience was obviously enjoying her as dead grandma Ida and I wish I had been able to hear the lyrics better.  What I did hear was funny and in great character.

Marela Kay Minosa is wonderful as Google and as Aaron’s ex-girlfriend Allison.  Another one of the best voices on the stage.  Jim Gross is a seriously funny guy and is perfect as the Waiter.  His big number “I’d Order Love” is an ode to Las Vegas that he performs with a throwback style to the Dean Martin era of crooners.  Leave it to a talented performer of his caliber to segue so effortlessly between playing an annoying four-year-old and a jaded New York waiter.

Matt Wetzel all but steals the show as Reggie, Casey’s best friend.  He’s a little ball of pure hyper energy, and if the repetitive nature of the score makes him sing basically the same tune three times, it goes down pretty easy coming from an actor as skillful as he is.  Loved every minute of his time on stage.  While some may take a little umbrage at the stereotypical portrayal of the ‘gay best friend,’ he does such a superb job with the material that it’s easy to forgive.

Lindsey Litka is fabulous as Casey.  She’s all hard angles and pointed jabs, the quintessential millennial girl, too wise for her own good, covering her insecurities with wisecracks and bravado.  Litka has a voice that is a gorgeous blend of pop star and Broadway.  When she belts out her big number, “Safer” her voice outshines the banal lyrics and finds that sweet spot we all wait for from the female lead in musicals like these.  Beautiful and immensely watchable, she handles the lines like a seasoned pro, the songs like a veteran leading lady, and plays each scene with the sure footing of a performer who is totally in her element on stage.

Reed DeLisle is Aaron and he couldn’t ask for a better part or one more suited to his abilities.  He does the awkwardly nerdy guy as well as any I’ve seen.  His embarrassment every time some ill-timed remark comes out of his mouth is palpable.  His discomfort at every social faux pas he makes with alarming regularity is so visible that the audience squirms with him, a true measure of an accomplished actor.  DeLisle has a physicality to his performance that adds a dimension to his character that is impressive.  And I take exception to the scene where the waiter tells him to get rid of his glasses, then immediately to put them back on.  This guy is gorgeous with or without.  His performance style is so good, we’re watching and listening to every word.

“First Date” at Spotlighters Theatre is a holiday treat and an adorable piece of theatre, and the Baltimore area can use all the adorable it can get.  Thank you to all involved for an early Christmas present!

Advisory:  Contains some adult language and sexual references.  Children under 13 must be accompanied by an adult.