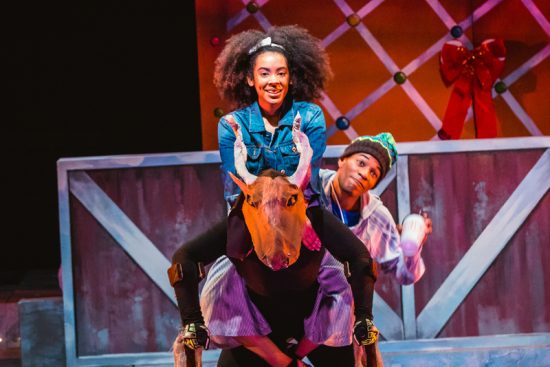 From front to back, Raven Wilkes, Sharisse Taylor, and Justin J. Bell in ‘Hansel & Gretel.”

On Sunday, the same day I saw “Hansel & Gretel” at Synetic Theater in Crystal City, was a profile of dancer-choreographer Carmen de Lavallade, the 2017 Kennedy Center Honor winner for dance. In the piece, she is noted for her “subtler skill…the way she has used that ease to etch a character, binding her body to the music to serve a dramatic purpose.” That is the definition of Synetic’s work, and in this “Hansel & Gretel” they have updated the Grimm story and nearly flawlessly captured a child’s view of the world and its dangers told through the body.

…a riveting performance in which words would be superfluous.

“Hansel & Gretel” is set in a shopping mall at holiday time where two children, played by adult actors Justin J. Bell as Hansel and Sharisse Taylor as Gretel, are the “good girl” and the “bad boy.” Hansel has some issues; he cannot sit still for more than a minute or two, but he is fearless and intensely curious. Gretel is rewarded for being compliant and no trouble; she is so used to outside validation she doesn’t have that much confidence in herself. Raven Wilkes is unforgettable in three roles as the children’s exasperated babysitter who is wedded to her phone; an elderly deer they encounter in the woods; and the Witch. While in the mall, Hansel breaks a snow globe of Gretel’s, and this catapults them dizzyingly through the mall into another time and place. Without landmarks or anything familiar to guide them, they must become each other’s North Star to bring them back to their world safely, albeit changed.

Bell gives “voice” to the need for movement and exploration and sheer speed that Hansel has through exquisite use of dance and tumbling. The sudden hurt that crosses his face when he doesn’t meet society’s expectations is like a lance in the gut. He doesn’t mean to be careless or unthinking and he keenly feels the approbation of others, folding in on himself as if to disappear.

Taylor is much more attuned to society’s expectations and has a greater need for approval. Her movements are often more hesitant as she seeks safety and the familiar. Yet with the help of her brother, she learns to take calculated risks and begins to understand partnership. With each new skill she learns, you can see the confidence in herself and her ability to survive reflected in the more fluid and muscular choreography.

Raven Wilkes is the embodiment of “binding her body to the music to serve a dramatic purpose.” When she is trussed artfully up in what looks like drywall stilts with a huge mask covering her face and wielding long arms with massive hands and fingers on the end, she almost seems as if the mechanical pieces are merely an exoskeleton. So graceful and sure and deft are her movements that they fall like a butterfly flutter on Gretel’s head or slash more frighteningly as she imprisons Hansel behind a metal cage. The hands and tilt of the head convey as powerfully as words the emotions as she entices the more compliant Gretel to be her child; there is longing and caring there, as well as a desire to get her own way. It is a riveting performance in which words would be superfluous.

Movement also depicts the arc of Hansel and Gretel’s relationship as it matures from rival siblings with a relationship of “the good child” and the “black sheep” to believing in themselves as allies and family. There is a repeated, small movement throughout the show where in order to calm each other down and reconnect, literally, they touch fingers individually, beginning with their pinkies, until they are palm to palm and finger to finger. It is a small, lovely gesture that conveys everything that trust and love can mean.

“Hansel & Gretel” is co-directed, co-choreographed, and co-adapted by Tori Bertocci and Elena Velasco. The two collaborators have done a brilliant job of parsing the essential message of the original tale and adapting it for a modern audience. The day I saw the show, as at 2:00 p.m. matinee, the audience was swept up from the beginning; there was little fidgeting and no talking. Children, and their carers were leaning forward and completely fixed on the stage. Bertocci and Velasco have done an amazing job of making this production entrancing to children and adults alike.

As always with a Synetic show, costumes (Dominique Gaddy), set/scenic/puppet design (Philip da Costa), lighting (Kelly Rudolph), and music/sound (Konstantine Lortkipanidze) were vital to set the scene and help bring the story to life. The Witch puppet was inspired, and so strangely human. And there was a wondrous small white bird that was a harbinger, an omen, throughout the show that was beautifully designed and impeccably manipulated by Wilkes; as the audience was leaving, a child was overheard saying, “Can I get a bird for Christmas.” The parents’ reply was not heard.