Theatre Review: ‘It’s a Wonderful Life: A Live Radio Play’ at The Colonial Players of Annapolis 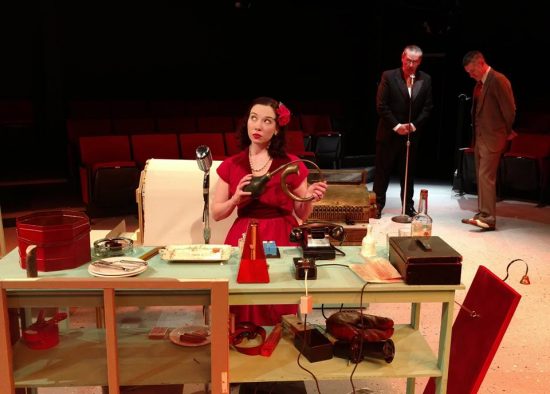 There are some holiday classics that are just best left unaltered – this isn’t one of them! “It’s a Wonderful Life: A Live Radio Play” by The Colonial Players is a sensational adaptation of the classic screenplay staged as a live radio show set in 1946. A staged radio show? Rest assured, what appears as an oxymoron is exactly what makes this show so wonderfully entertaining. With a wildly versatile, ever-morphing ensemble of talented actors, a smorgasbord of precisely-timed, nostalgic sound and staging effects, and a comical treat of hilariously clever commercial jingles (one of my favorite twists in this show), there is never a dull moment in this theatrical masterpiece!

With a wildly versatile, ever-morphing ensemble of talented actors, a smorgasbord of precisely-timed, nostalgic sound and staging effects, and a comical treat of hilariously clever commercial jingles…, there is never a dull moment in this theatrical masterpiece!

As a writer specializing in the adaptation of famous plays and films into live radio plays, Playwright Joe Landry adapts the classic screenplay of “It’s a Wonderful Life” into a layered blueprint that remarkably fuses the best of film, stage, and radio conventions together. In this adaptation, we witness the timeless tale of Bedford Falls’ George Bailey, who seeks suicide as a solution to a disastrous financial mishap, only to be intercepted by a guardian angel, Clarence, who reveals to George the perception of his life he’s been missing.

With artful use of The Colonial Players’ intimate theatre-in-the-round design, Director Scott Nichols wields Landry’s blueprint into a vividly fluid production, giving the audience a rich sensorial experience. Well-paced and well-placed action in this 360-degree environment frame a lively plot, as actors shift seamlessly from handling a bevy of props and sound effects to embodying a character, or two, or three (at times in the same breath) at various microphones thoughtfully scattered throughout the set.

In addition, the show’s skilled production staff of designers collectively charm the audience with an authentic display of costuming, props, and other effects that transport you to an era gone by.  Costume Designer Christina McAlpine spares no detail in her vintage 1940’s styling, complete with polished spectator shoes, seamed hosiery, and tailored suits.  Properties Designer Constance Robinson elevates the show’s post-war flair with a delightful array of knick knacks, including an antique cash register and those oh-so-charming classic studio microphones.  Set Designer Krisztina Vanyi envelopes you in the “on air” experience of this radio show with careful touches here and there to create the effect of watching as a studio audience.

Dann Alagna, Erin Leigh Hill, Mary C. Rogers, Timothy Sayles, and Jason Vellon comprise the stellar ensemble who carry this show with boundless energy and committed characterization, who will also delight you in song with harmony strong and pure.  Erin Leigh Hill and Jason Vellon are simply adorable together as Mary and George Bailey.  Mary C. Rogers as the sassy Violet Bick was quite memorable and her use of accents to distinguish each of the multiple characters she embodied was a joy to watch.  Timothy Sayles, as Mr. Potter, Joseph, and others, will amazingly shift in character from innocent child to worldly, wearied middle-ager in seconds without missing a beat.  I was quite tickled with Dann Alagna as the passionately expressive Italian, Martini.  Alagna also plays the classic guardian angel Clarence, among several other characters, and he brings equal intensity to each role embodied. Overall, the intense chemistry of the players is the magical glue of this ensemble; their wonderfully keen connection in performance is truly the cherry on top.

The Colonial Players’ live radio play of “It’s a Wonderful Life” will inject you with a huge dose of Christmas spirit, heartfelt sentiment, and buoyant joy. It’s a feast for the senses and for the heart!

Running Time: One hour and a half with no intermission.

“It’s a Wonderful Life: A Live Radio Play” shows on Thursday – Saturday, December 7 – 9 at 8:00 pm with matinees on Saturday and Sunday, December 9 & 10 at 2:00 pm at The Colonial Players in Annapolis, MD. For tickets and information, click here.